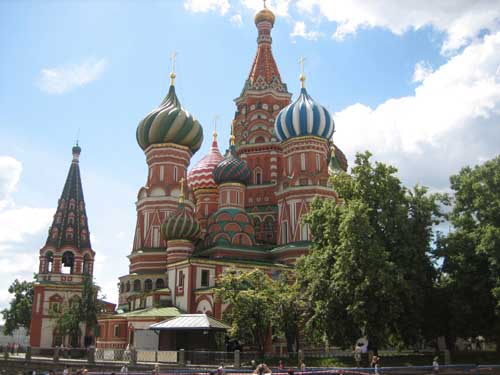 Mikhail’s warning rings in my ears as I battle to retrieve my suitcase from the squealing, overloaded carousel. ‘Remember – not use private taxi. I book for you. And bring bath plug!’

As I attempt to squeeze through the wall of travellers, a gorilla in army fatigues swats us aside and hefts a long, khaki tube from the filthy rubber conveyor. A space suddenly opens around him. I can see a shiny metal barrel poking through a split in the tube, and is that a trigger? Oh dear God, it’s a bazooka. Or maybe a fishing rod. Whatever it was, I’m glad he’s gone.

After three more circuits, each lasting over ten minutes, my bag is once again within reach and I fight my way back through a group of small children to grab it. The handle is as moist and sticky as glue, my fingers now stinking of someone else’s dark orange leak. For the rest of the day they reek of chicken vindaloo and Dettol. I peel my hand away and lift the case by the strap.

Outside stands a line of men, each holding a placard with a name scrawled on it, some of them the right way up. ‘Mikael Filipz’. ‘Shnotsky’. ‘Elli Makovitch’. One just says ‘Doctor’. Another ‘Miss’. I wander up and down the kerb, twisting my head this way and that, but none has my name, or anything like it. Gradually, each card finds an owner until I am the only passenger left.

It’s mid-January, it’s snowing and in my thin-soled business shoes and Spring coat I’m bloody freezing. The cold I started last week is in full flood and when I sneeze a sparkling shower floats to the ground.

I’m jolted from self-pity by coarse shouts from the car park opposite. ‘English? Moscow?’ The driver is a bear, as wide as he is tall, a fur hat resting on his eyebrows, an army greatcoat pulled up to meet it. He is slapping the roof with his mittens and beckoning.

I look around but can see no other option apart from a dozen other Vladimirs and Viktors, all proudly standing, smoking, by the black wrecks of once nice cars.

Against all the prior warnings from my hosts, I make a decision and a few minutes later we are on our way. The car is a death trap. When Vlad (since that is how he introduces himself) moves the steering wheel, for the first full turn nothing happens. Then there is a clonk from somewhere in the rusted depths of the Lada and the thing decides it will change direction. It does this whenever it feels like it, including on the wide, flat motorway into the city so Vlad is constantly sawing the wheel back and forth to keep us roughly in a straight line.

His English is limited to seven words, impressively six more than my own ‘spasibo’. Apart from ‘taxi’ and ‘Moscow’ for reasons I will never know he laces every attempt to communicate with what sounds like ‘Bognor’ and ‘wicked’. I nod politely, although the acrid blue fumes rapidly filling the car make it difficult to see his face. I remember reading that some Moscow highways are emptied around mid-day to allow President Putin to pop home for lunch without the proletariat getting in the way. I give it a try, pointing to the road ahead.

‘This road closes for Putin? Yes?’ At the mention of Putin’s name, Vlad snorts and launches a violent gob out of the window. Then he sees it’s not open. I feel responsible.

Soon he can obviously no longer see the road and we swerve violently across five lanes and skid to a halt by the side of the highway in the shadow of a deep forest. We clamber out into the icy bleakness of the hard shoulder, smoke and steam hissing from the radiator grill.

Into this hopeless scene, from a wonky cardboard shelter not fifty yards away, emerges an ancient woman with a face of weathered cowhide, wrapped in a heavy grey blanket and with her arms around a huge vat of honey. She is actually selling honey! Vlad breaks off from fiddling with the unwilling bonnet catch, pulls a roll of grubby notes from his pocket and tucks it in her fist. I can see he’s done this before. He opens the boot, pulls out a plastic milk bottle from under my case and scoops up the dark brown liquid until it’s full. She nods.

Then the most incredible thing: Vlad has been shaking his fist at the car, spitting curses that need no translation, when honey woman lowers the tub to the ground and leads him to the front of the car. Without a word, she squats down and stretches long twig fingers beneath the bonnet and gives a sharp tug. The catch yields and the bonnet springs open, much to Vlad’s amazement. A dense cloud of smoke gushes out and we step back while it clears.

We all peer into the black pit where presumably sits some sort of engine. I am not technical and from the expression on Vlad’s face neither is he. But honey woman now reveals yet more skills, shrugging the blanket from her shoulder to reveal a sturdy leather tool bag which she sets on the ground. Shiny chrome spanners, pliers and a drum of wire are selected and deftly put to work amongst the greasy pipes, rusted bolts and frayed wiring. She whistles as she works, a catchy folk melody I can imagine she once played on the balalaika as a girl, watching her father at work in their garage.

Now she’s finished, wiping her oily hands down the sleeve of Vlad’s coat and settling herself behind the wheel. A few reluctant turns and the engine coughs into life. She manages a weak, toothless smile – gone in an instant – but says nothing. She holds her palm out to Vlad. I hadn’t noticed that most of the middle finger is missing. His money stash makes another appearance, she hauls up her honey tub and tools and shuffles back to the hut.

It’s two more miserable hours before we reach my hotel. It’s called the Ukraina, one of Stalin’s mini-skyscrapers I’ve read about. It’s a brutal, art deco monster but at least it serves a more pleasant role than it was originally built for as the Ministry of Truth, twisting facts to support the state’s lies. Now I see where Orwell got his inspiration. There’s an awkward moment when Vlad lifts my suitcase from the boot. His hand has become firmly glued to the sticky handle and for several seconds is unable to tug it free. He has written a figure on a scrap of paper, ‘20,000’, and holds it up. I calculate that’s a ridiculous £200, and from the dismay on my face he knows it too. A stub of pencil comes out and the number becomes ’10,000’.

I shake my head, count out 5,000 Rubles and offer it to him. He shakes his fist and starts yelling, tries to grab the wallet and brings his face up so close to mine I can smell last night’s stroganoff. A yellow maggot of phlegm shoots from his tongue and runs down my cheek.

I’m rescued from the imminent punch-up by the arrival of the concierge, the sight of a uniform sending Vlad leaping back in the car and disappearing in a cloud of smoke and gravel. The journey has cost me nothing and I savour a smug wave of relief.

I turn to thank my saviour. He is standing on the pavement shaking my suitcase and trying to release his fingers from the handle. He finally succeeds but then unwisely wipes his hand down his immaculate trousers, leaving a long, brown stain like a flattened turd.