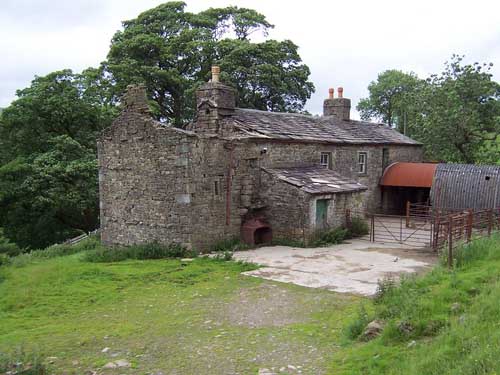 In his youth his strength was legendary, some called him the ‘iron man’. Bill Jarvis was the small-time farmer who could lift a calf above his head at the county fair and take on all-comers for a shilling in the boxing ring. By the age of twenty seven, both parents had died and, in the shadow of seven generations before, he dutifully inherited Oakridge Farm with its meagre acres of sparse grazing, rotting barns and primitive stone cottage.

Bill worked that farm as no other Jarvis had done, coaxing new life from the decay and dilapidation, slowly building a productive herd until Oakridge was once more viable. And he wasn’t alone, finally marrying Alice, the sweetheart he’d known from their first days at the village school. They had a daughter, Rose, now married and living her own life in Australia. After fifty years he’d still treasured Alice, even through her final, pathetic years of dementia and, now robbed by arthritis, the chores and the hours had defeated him. The cows were gone and with them, his income.

But memories of Alice went everywhere with him. A curl of silver hair he’d snipped in that gloomy final parlour, her wedding ring, the photo of her laughing on a Cornish beach, the only holiday they’d ever taken. The only photo he had left of her. Treasures from a treasured girl, tucked into his battered wallet, his reasons for carrying on. And every night he gently kissed the crumpled picture before turning out the lamp.

His daughter phoned often, worried sick for him, even sending an open ticket to Melbourne which he’d pinned up in the hall, with no intention of leaving, of deserting Alice’s home. ‘Oh Dad,’ she’d plead, ‘You know we’d love to have you come and live with us. The spare room’s ready and the lake’s teeming with carp. Promise you’ll come whenever you want, won’t you?’ He was grateful but he’d soldiered on alone.

It was a Tuesday, pension day. He’d spotted them earlier, loitering near the Post Office, two hooded youths on muddy bikes. They must have followed him as he made his way home in the failing November light, waiting until he turned into Back Lane. Waiting for hedges to hide their cowardice.

He remembers a great thump in the back and being on the ground, helpless to stop rough hands ripping open the old, worn greatcoat and grabbing the wallet. He struggles to remember more … wild-eyed faces, a long thin nose, a hare lip, someone screaming. ‘Leave him Baz!’ Then the crack of boot hitting bone as the pain cut through his chest like a sword.

A neighbour found him lying in the mud, on her way to bring him fresh-laid eggs. He drifted in and out of consciousness, sirens, calm voices, bright lights, a white room. There was bruising and three snapped ribs but two weeks later the iron man was home. Rose flew over to nurse him and spent weeks begging him to join them but, stubborn as ever, he’d refused.

Before she flew back, the police had called round for Bill’s statement, gently leading him through the events of that day, teasing out crumbs of detail. ‘It’s happening a lot round here I’m afraid,’ the young PC had sighed, ‘I don’t want to worry you but they often come back when they know where you live. Just make sure to keep doors and windows locked.’

It was early January in the coldest winter they’d had for years. By nine o’clock he was in bed, still fully clothed, the blue light of a full moon flooding the unheated room. As he lay there he struggled but failed to remember Alice’s face in the photo, as he did every night. He pulled the blankets over his head and quietly wept himself to sleep.

He didn’t know what had woken him. A fox screaming? No, there it was again, the shatter of glass, the creak of a floorboard. Hushed voices. It wasn’t fear that gripped Bill Jarvis but an anger that moved him painfully from his bed, across the room to unlock the metal gun cabinet. The shotgun had been used rarely in recent years, despatching the rats that came scrounging in the yard. He lifted the weapon, broke it, and after some fumbling slid in two cartridges and snapped it shut.

The landing was in darkness as he edged his way to the top of the stairs. Finally his fingers found the switch and the hall bulb froze two hooded figures in its glare. Heart racing, he held out the gun and found his voice. ‘What you doing? Who are you?’ he shouted, edging down the stairs. They were terrified and babbled like idiots. ‘We just came in out the cold, that’s all! Honest, we ain’t done nuffin!’

He’d reached the last step and they were barely an arm’s length from him when he saw the hare lip. And then the nose. ‘You! You’re the two bastards who …!’ Panic seized them. One started wailing, the other was driven to bravado.

He didn’t even realise he’d pulled the trigger but the pellets from the single shot hissed between the youths and slammed into the front door, shattering the timber. They fell to the ground in shock, a bleeding cheek peppered with pellets, the other with singed, smoking hair.

He stood over them, one cartridge left. ‘You … bastards! You’re the ones aren’t you?’ And then, ‘Where is it, where’s my wallet?’

‘I dunno … Baz slung it, in the river!’ And from the other, open hands raised in desperation, ‘Please mister, we’re sorry … don’t, don’t!’

His mind raced, images and emotions flooding his senses. These people, these vermin, had taken the most precious things in his life. Then he decided. ‘Get up!’ he ordered, his actions fuelled by outrage. He prodded them into the kitchen where they clung to each other in the corner. He switched on the light and lowered himself to lift the heavy trapdoor to the cellar.

At first they wouldn’t move, until he raised the shotgun to his shoulder and they scampered to the opening, before climbing, half falling, down the steep wooden stair into the damp, black space below. He slammed the trapdoor shut and slid across the two iron bolts, the boys’ screams now distant and thin.

Twenty minutes later, he was back downstairs clutching a small, battered suitcase, to rest for a moment in the weak dawn light that pierced the shattered door panels. After a long, last look around the hall, he tucked the ticket to Melbourne in his greatcoat pocket, closed the door behind him and set off down the lane.