Home
|
Dark tales
|
The best Pork Stiffado in the world 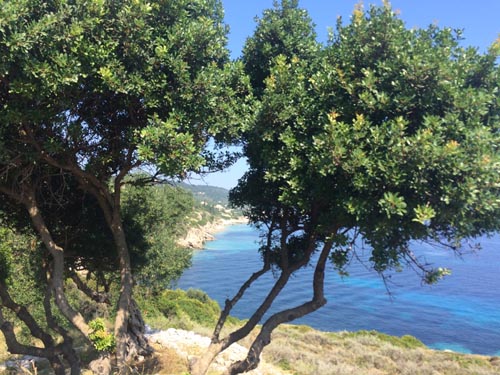 The tiny island of Stiapos, a crooked finger of rock barely three miles long, lies in the deep azure of the Ionian sea. Too small to attract development, its handful of residents survive through fishing and from harvesting their dense, ancient olive groves.

And that’s the way they want it to stay.

But there is one resident whose reputation has spread literally around the globe: Christina, whose ramshackle taverna and bunkhouse, built with her own hands, has become a Mecca for backpackers.

Christina, whose strength and dark Hellenic beauty leaves men speechless and whose insatiable libido is discussed at length on social networks. Unsurprisingly, her guests are almost always young men.

However, it is not so much the anticipation of seducing – or being seduced by – the lovely Christina that lures the solo traveller as the chance to sample her famous Pork Stifado. Tweeters speak of meat so delicate and tender that it literally melts on the tongue. Others rave about the flavours and claim she deserves a Michelin star.

It’s a balmy July evening, just like yesterday and tomorrow. Christina’s little fishing boat, with its peeling powder blue paintwork, rocks gently on its mooring. She is fully booked tonight, sixteen rugged young athletes who’ve sailed or rowed to Stiapos for a few days and nights of hedonism.

Christina is in the tiny kitchen stirring a huge, battered cauldron of Pork Stifado that’s been simmering since dawn. She pops a nugget in her mouth, nods slowly and smiles to herself.

For the next few hours the travellers feast on the succulent dish, mopping the rich juices with hunks of Christina’s warm crusty bread and drinking her beer barrels dry.

Around midnight, those still conscious start on the Ouzo and then the Mastika, clapping and singing wildly as a scantily clad Christina dances for them on the tables. Ricky, a philosophy student from Melbourne, strips off, hoots and whistles greeting him as he climbs shakily to join her. She cradles his face in both hands and immediately plants her tongue in his mouth. They gyrate, glued together, for a few moments before she suddenly breaks off, leaps down and pulls him into the back room.

The place erupts in applause and riotous laughter before the weary and disappointed young men finally weave a path to their bunks.

It’s shortly before dawn. A thin haze hangs over the still waters. Christina quietly casts off the mooring rope and rows far out to a small red buoy. She pulls in the oars, casts a look back at the deserted shoreline and lowers a worn grey rucksack, stuffed with bones and heavy with rocks, over the side to join the others in the weed a hundred feet below.

She returns to wake her remaining guests, greeting them with warm smiles and a cooked breakfast.

Ah, Stiapos! An island paradise with fish and olives but as far as anyone knows, no pigs.