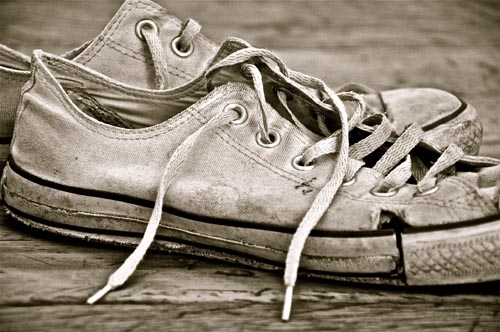 ‘She’s staying for how long?’ A pendulum of yolk swung from her teaspoon, dangling en route to an unsmiling mouth. Her husband struggled to reassure her.

‘Just for a few months – I thought you’d be pleased to have a little help.’ She pushed the half-eaten egg away and folded her napkin, smoothing it with deliberate, unnecessary strokes.

‘You remember, we talked about it … you know, someone to clean and cook, in fact, you were quite keen on it!’ Her arms were folded, lips drawn tight, her glare scorching the tablecloth.

‘And you’re always so tired’ he added, ‘I thought it would be a lovely surprise.’

‘So,’ she snapped ‘you go on-line and hire an eighteen year old surprise Moldovian nymph to join our family. Brilliant Hamish, bloody brilliant! Anything else she might care to do for you while she’s here?’

He rose and came round behind her, attempting to massage her neck. She ducked away.

‘Oh come on Rachel, how long have we been married? Twenty two years next May! I’d sooner jump off a cliff than deceive you. I’m your man!’ She twisted from his grip and started clearing the dishes, avoiding his eyes as she elbowed a path to the sink.

‘OK, so where did you find her then, dodgy web site was it, ‘Tottie 4U’ perhaps?’ Suds sprayed the floor as a frying pan thumped the draining board.

‘Don’t be silly,’ he said. ‘I used an agency, that new one, in town. They only deal in students who want to live with a family and improve their English.’ He was surprised he’d managed to stay calm and sensed that he was starting to turn her around.

‘And in return, they help with the housework.’ He reached around her waist from behind.

‘But you’re right,’ he said. ‘I should have asked you and I’m really sorry. But I’m not daft Rachel, we’ll interview her first to see if we both like her. OK?’

He felt her body relax a little and she stopped scouring last night’s casserole to gaze out of the tall sash window at the patio table where a lanky, flop-haired youth sat slumped over a PlayStation.

‘And Marcus?’ she asked, ‘What’s he going to think about Lolita?’ She turned to face her husband. ‘He’s never been within a mile of a girl in his whole life!’

She took a step back, glaring. ‘Oh it’s Anna is it? Anything else you’ve discovered? Her bust size, maybe. Is she a virgin? Or was that not on the form?’

She moved away from him and undid the apron. ‘OK Hamish, we’ll give it a go.’ She seemed to have reached a decision. ‘But,’ she added, forefinger wagging inches from his nose, ‘Watch it! If I catch you leering into nubile cleavage over dinner she can say goodbye to Cheltenham and I’ll drive her to Heathrow myself. Understood?’

He hardly needed reminding of who in this relationship had the final say on most decisions. ‘Agreed,’ he nodded, raising both palms in compliance.

A couple of weeks later, on a grey Saturday morning, a taxi swung into the driveway of the rambling Edwardian semi and a tall, smartly dressed young woman stepped onto the gravel, a riot of black curls cascading over her shoulders. Hamish Peterson hurried from the porch to welcome her, hesitating for a moment before exchanging two hasty, superficial kisses, keenly aware of two pairs of eyes watching from the doorway.

As they reached the front door, the girl smiled broadly and stepped forward to shake Rachel’s outstretched hand.

‘Hello, I am Anna Popescu!’ she said confidently. ‘Please to meet with you for interview, Mrs Peterson. Please – I bring for you!’ From behind her back she swung an extravagant bunch of roses which she presented with a sincerity that, for a second, took the woman completely by surprise.

Marcus had sunk into the shadows behind the door, observing the creature from a safe distance but now emerged to join the group as they entered the lounge. His mother suddenly realised her oversight.

‘Oh Anna – this is our son, Marcus.’ He’d hung back, loitering by the door, eyes hidden under a greasy fringe. She pulled him in by the elbow, pushing the hair from his face. ‘Marcus, this is Anna. You know, she may be living with us for a little while?’

The boy shuffled forward, a limp hand half raised in reluctant greeting. The girl turned to face him, bringing her palm across in a stinging high five. ‘Marcus!’ she exclaimed, ‘I have uncle Marcus! He heart doctor in, err … ‘ She thumped her chest. ‘How to say? Work in heart?’

Marcus looked at his mother, then back at the girl. ‘Surgeon?’ he ventured, finally bringing his eyes into contact with hers.

‘Yes, he surgeon, in Bucharest!’ His eyebrow rose.

‘Please, Anna, won’t you sit down?’ Rachel pointed to a chair but the girl waited until the couple had settled on the sofa before taking her seat. Hamish was amused to see his son discreetly smooth a few wayward strands behind his ears and hoist his jeans to conceal the waist band of his Kalvin Kleins. How young men’s trousers actually stayed up, with crotches dangling around their knees, was to Hamish a constant source of bafflement.

Any qualms they might have had about the suitability or integrity of the poised young woman soon evaporated. Conversation moved swiftly. She was almost nineteen, an accomplished pianist, she chaired her college debating society and had captained her school at soccer and netball. She played violin in the National Youth orchestra and was seeking a publisher for a romantic novel she’d written.

The list went on. There were three brothers and four sisters, her father (a nuclear engineer, she added) had raised the family on his own after her mother had died when Anna was twelve. And now, she told them, she wanted to improve her English before embarking on her own medical training back in Romania.

She asked about the Petersons, what they did for a living, about their hobbies, their holidays and their dreams. She complemented Rachel on her home, admired Hamish’s silver BMW and, unprompted, asked Marcus if he liked running.

He hesitated. ‘Well, yeah,’ he replied, athletics being one of the few activities, apart from video games, that he’d ever shown the slightest interest in. However, his curiosity in the girl, Rachel noted, seemed to be growing and she wondered whether having her resident might bring not only the house tangible benefits, but her immature son too.

Anna, slightly taller than the boy, had flushed briefly as the little exchanges with him developed. ‘I run 10K,’ she said, ‘sometime half marathon. And you?’

He swallowed, aware that all eyes were on him. ‘Me? Er, yeah, me too – still trying to get under two hours.’

She smiled, a broad generous smile. ‘My best one hour forty.’

‘Wow’, he grinned, ‘That’s quick!’ glancing across, open-mouthed, at his mother. ‘I wish!’

The couple left the teenagers to their running chatter and slipped out to the kitchen. Hamish filled the kettle, waiting for Rachel to speak first.

‘Is there anything that girl can’t do?’ she asked. ‘And her father, he must be a bloody saint!’

He turned, leaned against the sink and folded his arms. ‘Well?’ he asked, the curl of a smirk on his lips, ‘What do you think?’

‘I think she’s brilliant,’ she replied, ‘Not at all what I expected.’ She started to giggle, ‘And what about Marcus? Did you see his expression when she started talking to him, really talking to him?’

Her husband nodded in agreement. ‘I know. If nothing else, it might be just what’s needed for him to start growing up.’ He tipped his head to one side. ‘So we’re agreed?’

Within a few weeks, the paperwork was behind them and Anna Popescu was installed in the guest room at the back of the house. For Anna, no task seemed too daunting or too arduous. She shopped, she cooked, she scrubbed, cleaned and tidied from dawn to dinner, leaving Rachel amazed at how much she accomplished every day.

Hamish too, was highly impressed. ‘Did you know, today she mended the mower, cut both lawns and replaced those missing fence planks? Incredible!’

At dinner, the conversation would be laced with the good-humoured banter and rich stories that gradually helped the bright young girl to develop her grasp of practical English.

But it wasn’t all work. On most evenings, Anna would yank the computer from Marcus’s hands and drag him off for a run. Sometimes they’d be gone for an hour, occasionally two. One warm Wednesday night it was past eleven when the pair arrived at the back door, faces flushed and wet, arguing in good humour about who’d won the final sprint to the gate.

‘We’re off to bed then Marcus,’ called his father from the stairs, ‘Not too late – college tomorrow. And don’t forget the lights.’

The weeks passed easily through July and into August and Anna’s departure date, scored in Marcus’s red handwriting on the kitchen calendar, drew near. The girl’s command of English had far exceeded her expectations and for Marcus, his half-marathon times had tumbled to one hour fifty minutes. The pair had become close friends, often meeting up with his college friends for a beer after their runs. And the PlayStation now lay buried beneath a pile of magazines in the lounge.

It was a week before Anna was due to fly home and Hamish Peterson had finished his client meetings and arrived home a couple of hours earlier than usual.

In the hall, muddy trainers lay scattered on the mat, a wet towel and a T-shirt draped over the bannister. He became aware of sounds from upstairs, a low voice calling and, curiosity growing, quietly mounted the stairs to the long landing.

As he crept along the corridor, the noises grew louder until he realised they were coming from Anna’s room, its door slightly ajar. He knew he shouldn’t be there, hated himself for it, but some deep, dark curiosity drove him to crouch and peer through the crack in the door. He gasped silently at the scene.

Anna’s pink, sweating face lay on the pillow, strands of wet black hair plastered to her brow. She was moaning gently, every now and then whispering ‘Oh god, please, please.’ A foot protruded from beyond the quilt, beneath which the mound of a hidden head rose and fell between the hills of her knees. He retreated back along the passage and edged down the stairs to the kitchen, his mind swimming with emotions both of shock and, he had to admit, paternal pride.

He was at the fridge searching for a snack when the back door burst open and a panting figure staggered in, translucent vest stuck to his chest. ‘Marcus!’ he gasped, confused thoughts and wild imagery flashing through his mind.

‘Yeah, what?’ answered the boy, hopping across the tiles, struggling to kick off soiled running shoes without undoing them. His father took a step towards him, open mouthed, questions creasing his face.

‘So … where’s your mother?’ The tousled head looked up. ‘Dunno, upstairs I suppose. She went to help Anna pack.’