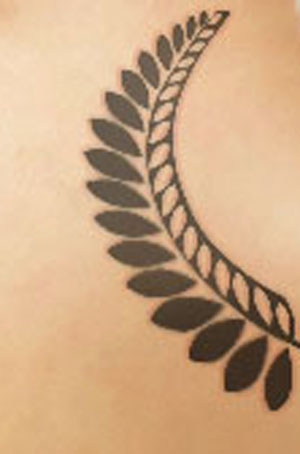 He waited until breakfast before telling his wife. As he’d feared, she was livid.

‘Jesus, Gavin … a three day conference in Bangkok and you come home with a bloody tattoo!’ She stood up with such force her chair toppled to the floor behind her.

‘Where is it?’ she demanded, rounding on him to stand glaring, hands on hips, awaiting an explanation. ‘Show me!’ she screamed.

He lay the dripping honey stick across his plate, rose slowly and tugged at his T-shirt. His left shoulder blade now sported an intricate, green-inked leaf, no larger than a thumbnail. She moved closer to examine the delicate artwork.

‘It’s tiny’ she said, her anger evaporating. ‘You can hardly see it. I thought it was going to be a two foot Buddha or a fire-breathing dragon.’

He gave her arm a gentle squeeze, straightened his back and gave a Boy Scout salute. ‘First thing tomorrow, I’ll have it removed. Promise.’

She sensed relief in his voice and, for a moment, something else. ‘Good’, she replied, ‘And for god’s sake don’t let the children see it, Laura’s been on about having a swallow on her ankle for months.’

The mood lightened, he popped a couple more croissants in the oven and poured them coffee.

She took a sip and, with a mother’s look, carried on quizzing him about his folly. ‘What on earth were you thinking of Gavin, it’s just not you.’

He grinned, silent for a few seconds, pondering which colleague his story should betray.

‘Well, it was just a silly dare’, he began dismissively, staring into his coffee for a little too long. He looked up. ‘We … we’d had a heavy session at the reception on the last night and thought we’d hit the old town across the river.’

She needed more. ‘And then?’ she asked, raising an exaggerated eyebrow.

‘Honestly?’ he replied. Another brief pause, his lips still, brain racing. ‘OK, Jason Carter bet me a Magnum I wouldn’t have one done so I got the smallest I could find. That’s it!’

He was relieved that she seemed satisfied and moved quickly to clear the dishes, and the topic too.

That glorious July Sunday passed slowly, an afternoon barbecue at the Wilsons, a pleasant bottle of Merlot together on the terrace that evening against a crimson sunset, an early night.

As they lay together in the moonlight, she began to regret her reaction that morning.

Weren’t tattoos now a middle class badge? What could be so wrong? After all, even some of the Royals had one. She ran her fingers down the nape of his neck, stroked the powerful shoulders of her city trader, her reckless man-boy, slid her hand under the boxers to coax him to rise and perform. But nothing rose, nothing stirred. He turned briefly to kiss her cheek, to plead a sudden tiredness, before rolling over to leave her feeling empty and alone.

He slept fitfully, waking with a jolt from a vivid nightmare. He’d got stupidly, recklessly drunk in a Bangkok dive, handed his wallet to a tattooist. A knot of men had appeared, taken Jason’s money too, before the two friends stumbled, laughing hysterically, into a dim, curtained booth with three naked girls.

He lay on the quilt, drenched in sweat and wished it had just been a dream. But he knew he could never tell Sarah the truth.

Before dawn, he was dressed and away, mood heavy with guilt as he kissed her goodbye and left her sleeping.

By 10 o’clock, the urge to erase the legacy of the disastrous trip had become so overwhelming that he cancelled the morning’s meetings and took a taxi to a laser clinic. To his relief the procedure was simple and, from the crowded waiting room, a common one too. He thought he caught a wink between the technician and the girl who took his payment.

At dinner he could only pick at his favourite prawn curry and ate little. By nine they were undressing for bed.

His wife came up behind him in the bathroom, his head over the basin, toothbrush in hand.

‘It’s left quite a mark, you know,’ she said gently, as he straightened up. ‘Looks really inflamed … must be quite sore.’

He wiped his mouth dry and twisted round to examine it in the mirror. ‘They said there’d be a bit of swelling for a week or two,’ he replied. ‘I’m sure it’ll be okay.’

But deep beneath the tissue, ancient nuclei stirred into life by the laser’s heat, twitched and mutated.

She woke to the insistent beep of her husband’s alarm, stretched across the mound buried beneath the covers and silenced it. ‘He needed that sleep’, she thought, gently peeling back the linen.

The sight that met her eyes was so shocking that it was seconds before her screams began.

Her husband lay on his back, his entire body covered in a dense, green network of foliage, eyes staring wide at the ceiling. Beneath the surface, thorny stems had woven around his bones, pushing apart muscle and flesh and puncturing the skin in bloody, oozing eruptions. The thickest branches had grown across his shoulders and in the darkness had coiled themselves again and again around his neck, in silent strangulation. His mouth hung open, stiff aubergine tongue lodged between blackened, dry lips.

And on the pupil of each bulging eyeball lay an intricate green leaf tattoo, no larger than a thumbnail.