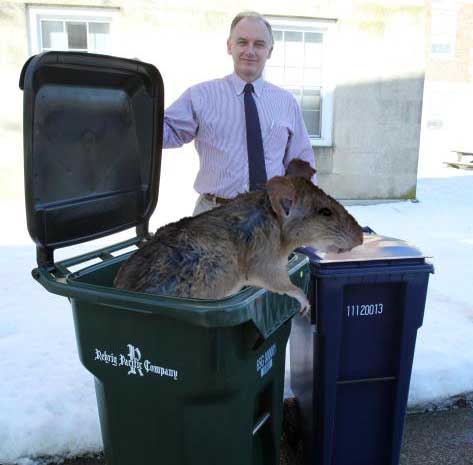 Following reports in the national press of rats ‘the size of cats’ breeding on a Liverpool industrial estate, a woman from Blackpool spotted a huge rodent last week eating the washing from her line.

Grace Pridmore was cooking breakfast for her husband Garth when the creature appeared in their back yard. ‘I thought it were Alsatian from chippy but ‘e were a bigger bugger than that.’ Mrs Pridmore finished serving Garth his black pudding butties, ran into the yard and killed the beast with a single blow from a spade.

Council vermin control officer Malcolm Denton (pictured above) measured and weighed the rat before removing it for disposal. ‘Well, I’ve never seen owt like it in me 32 years,’ he told Spoofflé. ‘Just over 33 kilos and 2.3 metres nose to tail. You wouldn’t want to meet that on a dark night.’

A local vet examined the rat before it was taken away and discovered that it was actually female and appeared to have recently given birth.