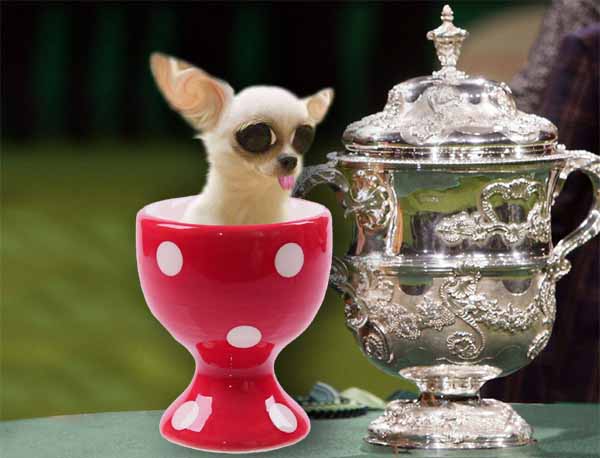 Despite tough competition from over 40 competitors from across the globe, the ‘Best in Breed’ award finally went to Lady Cameo D’elfinia, a miniature Winzigen weighing only 96gms, barely more than a large hen’s egg.

Winzigens are bred in Weisoften, Germany and in recent years have found popularity with celebrities such as Stormy Daniels, an American entertainer, who dotes on her pet ever since Donald Trump gave her one in 2006.

Other high profile owners include actress Natasha Pandorovsky, the girl friend of billionaire energy oligarch Anatoly Grigorievich, who we understand is the proud owner of last night’s champion.

We spoke to Ms Pandorovsky, 19, this morning at her suite at the Mandarin Oriental on Hyde Park.

‘Sure, is being big moment for me,’ she said. ‘But always I know am winner.’

We asked her why she had felt so sure of winning before the show, when the bookmakers had put odds of 250-1 on her dog as the rank outsider.

‘Is simple,’ she said. ‘Anatoly he buy for me Crufts Show as birthday present last week.’