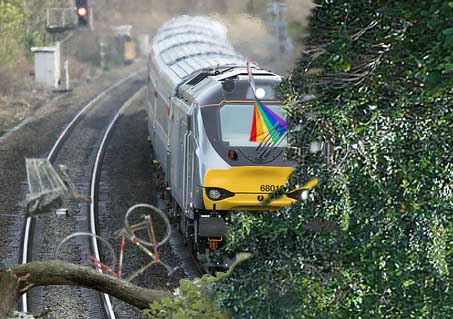 A new system, commissioned by Secretary of State Chris Grayling’s department, uses artificial intelligence (AI) to predict where trees and shrubs may cause delays on the UK’s rail networks.

A camera in the train cab gives a driver’s eye view of any vegetation near the line. The recording is then fed into the £86 million AI system, which is claimed to be able to predict where problems will occur, such as dangerous trees or branches hitting train windows.

The information enables Network Rail to send out teams with large scissors and bin bags to remove the offending foliage before any of the wrong sort of leaves drop onto the rails.

We asked Doug Avery, 38, a driver with Southern Railways what he thought of the prototype scheme, already in use on his section of track.

“Bloody brilliant,” he said. “To be honest, without the AI camera in my cab I’d have no idea there was any trees or bushes in the way.”