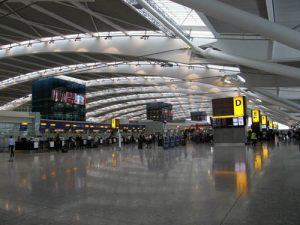 A leaked proposal from the Air Transport Standards Agency (ATSA) suggests that from 2021 airlines may be permitted to pass passengers through a size gauge, in the same way as cabin bag dimensions are checked today.

The sixteen page document obtained by Spoofflé appears to be a draft discussion paper, routinely distributed to ATSA members. However, the proposed changes will ring alarm bells with passengers, coming right after this week’s announcement by several airlines of smaller carry-on bag limits.

Our Transport Correspondent Gary Axelrod gave his opinion on the proposal. “It’s nothing new. Airlines have been looking for a way to charge fat people more to fly than skinny ones because it takes a lot more fuel to get them in the air and even more to keep them up there.”

One diagram in the proposal depicts a metal doorway with an aperture measuring 23cm wide and 180cm high. “It’s absolutely daft,” added Gary. “The average bloke is never going to squeeze his belly through that.” Another diagram appears to provide a commercial solution, at least allowing larger people to still fly with their families. This shows that the slot is able to slide open to increase the width of the gap. A pointer on the gauge (calibrated, we noted, from £0 – £999) indicates the penalty charge.

This lunchtime, Spoofflé decided to carry out an impromptu experiment of its own in the Departure hall at Gatwick. The nice people at B&Q cut a slot in a large sheet of plywood and we set up the gauge just inside the main entrance. As an incentive we offered travellers slices of pork pie from yesterday’s Spoofflé staff meeting and we soon had a queue of curious visitors. In total 177 people tried to get through the slot of whom 155 failed. One man managed to get himself wedged halfway through and unfortunately we had to saw the rig in half to extricate him, bringing the experiment to a premature end. Our staff were asked to leave the airport shortly afterwards. So much for freedom of the Press.