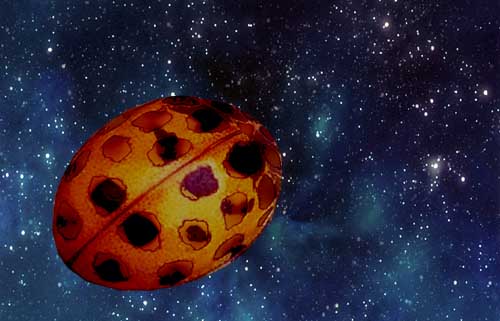 Leading astro-physicists from NASA were this morning racing to a semi-detached bungalow in Chepstow, following the extraordinary sighting of an unidentified object by amateur astronomer Bernard Focuss.

Mr Focuss, 63, built his 15 inch telescope for under £25 from parts bought on eBay and for the past eight years has scanned the night sky with it. Spoofflé’s Technology correspondent Crispin Grundwald drove down to meet him in his B&Q tool shed observatory.

‘Last Sunday night I first spotted it,’ he said, ‘at precisely 23.04. It looked a bit suspicious because not only did its trajectory suggest that it had come from another solar system but after a few minutes it actually started to accelerate towards the Earth. Now of course that means it must be propelled in some way, possibly by a means that is way ahead of anything our civilisation can even start to imagine. You can also see several vast craters on its surface, or perhaps they are launch pads, who knows? That’s when I sent the data to NASA, who incredibly hadn’t yet seen it.’

Crispin asked Mr Focuss if he’d estimated the size and speed of the object. ‘Yes, I did some calculations and I believe it’s about 30 miles wide, at that time approximately 700 million miles from us and closing, and travelling at no less than 16,000 mph. I think we should all be very, very concerned.’

Crispin, himself a keen astronomer, took a look around the telescope and asked Mr Focuss how long a ladybird had been sitting on the lens.