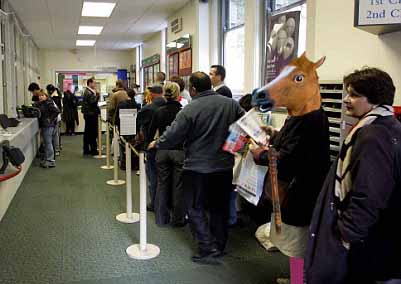 A man wearing a party horse mask and carrying a truncheon queued for over twenty minutes in a branch of NatWest Bank in Hull on Monday without being challenged by staff. He demanded money at the counter but cantered off empty-handed when a cashier pressed the panic button.

Deputy Manager Tracey Plumstead had been alerted to the person’s unusual appearance by concerned customers but decided not to act.

‘I thought maybe ze had an embarrassing skin condition,’ she told Spoofflé, employing the latest non-specific gender pronoun, in accordance with recommended corporate newspeak. ‘And I certainly didn’t want to embarrass ze.’

We asked Ms Plumstead whether the fact that the person had also been carrying a large truncheon and an empty holdall would not have seemed suspicious, particularly in a bank.

‘Well, no, not really,’ she said. ‘Ze also had huge hairy hands and pink ankle socks but I’m not employed to judge people am I? And it is Hull.’

A 38 year old man was later arrested and will appear at Hull Magistrates Court on Friday morning, charged with attempted robbery and impersonating a horse.