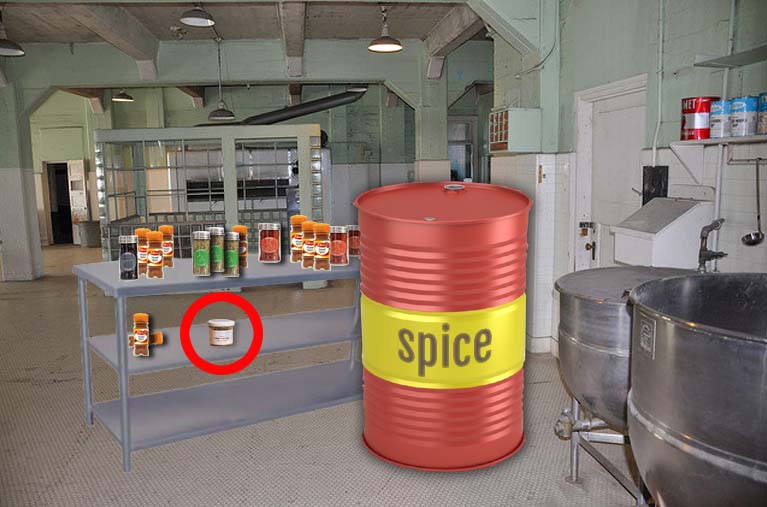 The new Prison Service regime at Birmingham is already having a significant impact on the inmates’ safety, following the exit on Monday of disgraced contractor G4S .

A highly carcinogenic jar of Indonesian nutmeg, banned from the UK since 2011 for containing lethal Aflatoxins, had slipped unnoticed into the kitchens in a recent food consignment. The nutmeg jar (circled in the photo above) was removed by a Government HazMat team and destroyed, after the kitchens had been safely evacuated.

“I can honestly say that if Slasher Jones hadn’t been on the ball and pointed the illegal nutmeg out to my staff, it could easily have found its way into prison food. God knows how it got there, but whatever, he should be extremely proud of himself.”

Spoofflé understands that a major investigation is now underway and that a number of staff at a West Midlands balti wholesaler have been suspended.

We managed to call Mr Jones on one of his mobile phones in his cell this morning and found him to be quietly modest about his heroic action. He stopped building the drones he makes for birthday presents for the other prisoners to speak to our crime correspondent, Maurice Locke.

“I seen it, and I knows what it is – it’s them foreign nutmegs innit?” He acted swiftly he told Maurice, to separate the cancer-causing powder from the rest of the delivery. “I knows I aint got much time see, cos it’s like, so dangerous! Luckily I managed to wheel out the big drum of that spice onto the landing for the lads to share out to cook their own curries so it didn’t, you know, get contaminated like.”