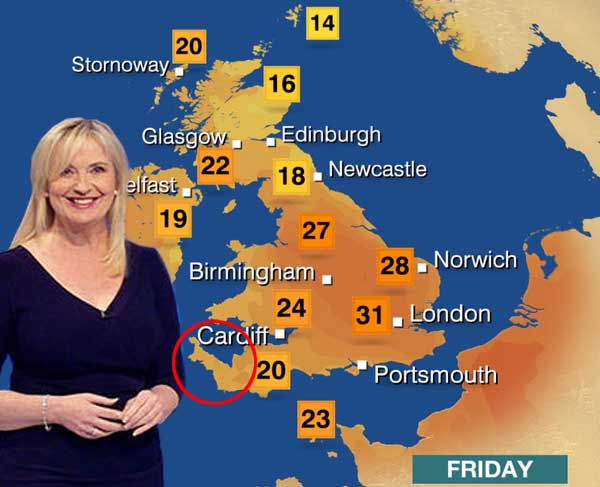 Following multiple complaints from viewers in South-West England and the Channel Islands that weather presenters were obscuring their region, the BBC has started trials of a modified UK map.

In the new chart, Cornwall curves upwards so that Penzance is adjacent to Tenby in South Wales and the Channel Islands are slightly to the west of Bognor.

The BBC’s Head of Weather Raine Downey told us: ‘So, we honestly didn’t think anyone would notice going forward. I mean, it’s not as though we’ve moved London is it?’

However, the Royal Order of Cartographers were emphatic in their condemnation of the new map. In a statement released this morning they said:

‘It is simply outrageous that the BBC should feel free to trample willy-nilly over the very definition of our British coastline whose specific geographic boundaries form the legal and physical definition of our sovereign territory stretching back millennia.’

A representative of the Jersey Tourist Board also tweeted last night:  ‘Strongly object being plonked next to Bognor, whose weather, let alone culture, nothing like ours.’