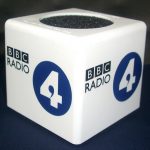 The Plain English Society has successfully campaigned for the suspension of a BBC Radio 4 presenter Cullum Stride-Farquarson following his persistent use of ‘irritating and unnecessary’ language.

Mr Stride-Farquarson had been accused of not only ending his questions to on-air guests with ‘going forward’ (most recently when asking the Prisons Minister yesterday ‘What will you do about this problem in the future, going forward?’ but also starting his sentences with the annoying word ‘So, … ‘

Immaculate Pedantia, the Brazilan-born president of the Plain English Society said: “People look to the BBC to maintain standards in the English language. If spurious and lazy habits such as this are allowed to become the norm, who knows what our language will become?”

We understand that the BBC has received 234,000 language-related complaints in the past 12 months from Radio 4 listeners. Their head of Standards & Training, Crispin Strepsil, said: “It’s like, a big ask for  the company, you know, right from the get-go we try to appeal to as wide an audience as possible, but we’re trying.”