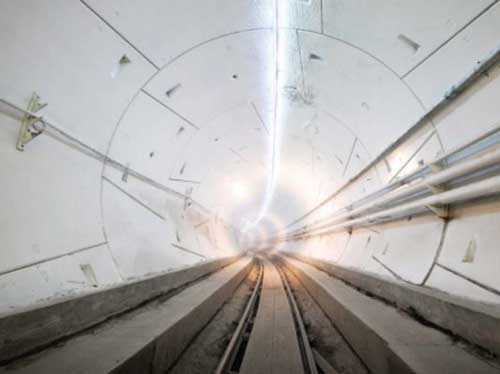 Elton Husk, the billionaire boss of Tossa cars, has made a bold offer to the British Government: he claims he can build an ultra-high speed tunnel linking London, Birmingham, Manchester and Leeds at less than half the current £56 billion cost of the HS2 project.

Speaking to Spoofflé last night from his LA office, Mr Husk told us:

‘HS2 is a crock of shit – you’re gonna trash that beautiful England countryside, rip up folks’ lives and pollute the environment? For what, to save a few goddam minutes? Hello?’

The vacuum tunnel technology that Mr Husk has developed would suck bullet-shaped ‘pods’ constructed from Graphene, each carrying 50 cars, at over 1,700 mph along a frictionless air bearing, a mile below the surface. He gave an example of the service reducing travel time between London and Manchester to under seven minutes.

‘I told your transport honcho Grayling I’ll build the suckers for £25 billion, tops, and the whole deal will be running by 2022, guaranteed.’

We asked to speak to someone from the Department of Transport but they declined. They later emailed Spoofflé’s Transport desk the following statement:

“HS2 represents the UK’s most significant advance in high speed, super-integrated rail network infrastructure investment since the days of steam. It offers massive benefits to inter-city travellers, including a six minute reduction in the London-Manchester journey time, an exciting new range of organic ham and pickle sandwiches from Jamie Oliver and toilet roll replenishment every morning.

For the lucky homeowners currently living along the proposed routes, HS2 means they can finally move to a nicer house, without the high cost of paying an estate agent or the frustration of finding a buyer. The proposal from Mr Husk is interesting, however tunneling is not the answer as we have already spent £13 billion on consultants and thousands of extremely detailed drawings and we have already bought the 1,000 miles of track and sleepers required.”

Faster than anything China or Russia have.