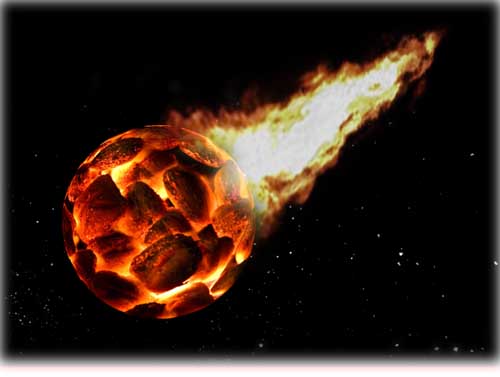 Elton Husk, the billionaire boss of Tossa cars, is tonight locked in frantic negotiations with NASA over a bold plan to intercept the rogue comet on course to hit Earth on May 14th.

The 137 mile-wide comet, known as Hades III, is travelling towards us at over 18,000 mph and if it collides with Earth is feared would wipe out virtually all living creatures, with the possible exception of cockroaches, Japanese knotweed and PPI salesmen.

Mr Husk has offered to launch his 390 foot long Falcon 10 rocket (already fuelled up and on the launch pad) within the next three days, with the intention of crashing it directly into the comet and, he hopes, pushing it off course and in the process saving humanity.

Spoofflé understands that contract negotiations are currently stalled over Mr Husk’s demands for his face to be printed on all dollar bills for the next 100 years and a guarantee of the 2019 Nobel Peace prize.

While the threat of Armageddon hangs over the world, the British public appears typically relaxed. A stoic Lydia Spellworthy, 84, stopped feeding the pigeons in a Barnsley park to tell our local reporter: “Well, our Bertie reckons it’s not a comet but one of them asteroids which he reckons is even nastier. And ‘e should know, he’s suffered wiv ‘em for years.”