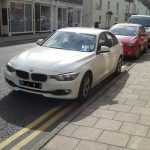 People with hidden foot ailments, including Athlete’s Foot, bunions and in-growing toenails could be given Blue Badge parking permits under new government proposals.

The Department of Transport said that it is time councils recognised the special challenges endured by sufferers of foot disorders who wish to shop more easily. DoT Spokeswoman Caitlin Forsyth-Spangle told Spoofflé: “We’ve been itching to bring in these changes because we know it’s been a sore point for many people.”

Ronald Splinter, a 68 year old retired plumber from Dagenham, explained to our reporter how the new permit would affect him: “Oh brilliant, just brilliant!” he said. “I’ve ‘ad a very nasty oozing verucca for years, it makes ‘obbling the 200 yards down to BetFred twice a day a bloody pain. Now I’ll be able to park right outside!” Mr Splinter added that his wife, mother, three sisters, seven aunts, six sons and a daughter with a boil all drove and all were suffering from long-standing foot conditions.

Our social affairs correspondent Dinghu Bahpiliapia estimates that the new scheme would increase the potential number of Blue Badge holders, free to park on double yellow lines for up to three hours, from the current 2.4 million to over 23 million.