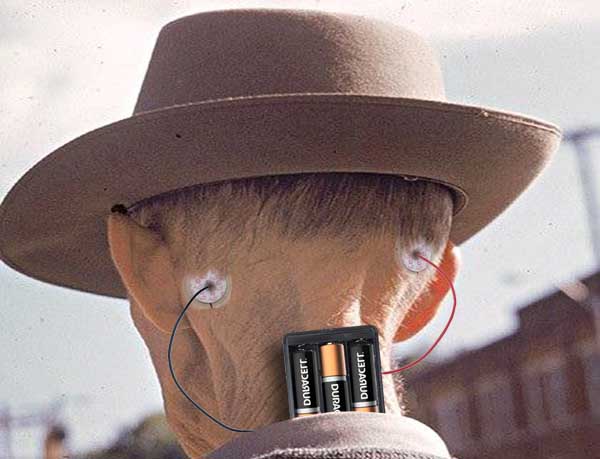 A Birmingham man has invented an electrical device which he claims dramatically improves the working memory of older adults.

The ‘Cerebrummie’ is the brainchild of retired BT engineer Arthur Monke and goes on sale next week for only £4.99 in selected Aldi stores and Age UK shops.

Mr Monke, 81, explained the product background to our science correspondent Dr Oliver Flimwell. ‘Well I read this article,’ he said, ‘about an experiment in Boston where really old folk did as well as youngsters at short-term memory tests when a pulsating electric current was passed through their brains. But it was in a laboratory and they reckoned it would be years before anything would come of it so I thought “bugger it, I’ll make my own”. So I did.’

The engineer worked for eight months in the tool shed at his modest semi near Halesowen, before emerging late in 2018 with the first prototype. ‘It’s nothing fancy,’ he said, ‘just a cascade of monostable flip-flops feeding a 68Hz pulse modulator. Oh, and some Sellotape too.’

The initial results however, were not promising.

‘My wife Enid tried it first,’ he said, ‘but after a few minutes she started making goat noises and asking me where Damascus was. Then I realised I’d mis-read the diagram and I should have used 4.5 volt batteries, not 45 volt. She’s almost stopped the noises now but she keeps calling me “Eric” and showing off by reciting the periodic table to our neighbours.’

Bernhardt Lunz, Professor of Geriatric Neuroscience at the University of West Wittering, warned of the dangers of such devices. ‘We should be very cautious about such tinkering with brainwaves,’ he said, ‘not least because improving one part of the brain might have undesirable effects on other functions, as Mrs Monke has unfortunately discovered with the ‘Cerebrummie’.’