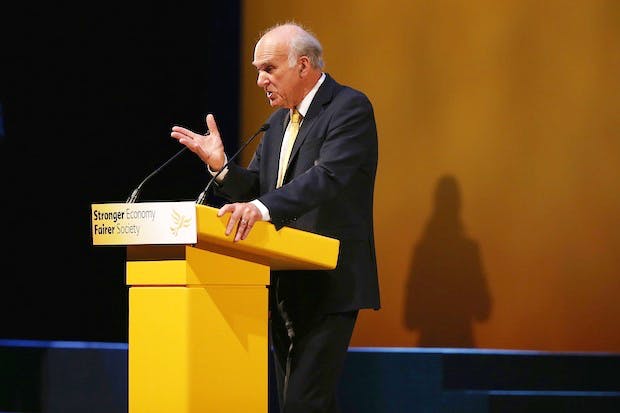 Over seven hundred people contacted Spoofflé to complain that they hadn’t experienced any such feeling, either at the moment of marking their cross on the referendum paper or on leaving the polling station.

Tracey Farley-Smythe, a 38 year old IT developer from Coventry, was typical in reporting that she definitely didn’t have any type of spasm. ‘I’ve been thinking about it a lot since his speech and I can’t recall any special feelings, just a damp left foot from my leaky shoe.’

However, solicitor Maurice Weber (62) knew exactly what he meant, even if his actual words were ambiguous. ‘As soon as I folded the ballot strip and dropped it into the box it was ‘bingo!’, bright red and yellow flashes, a kind of a fizzing down both legs and I had to sit down. My wife had one too.’

Elsie Froggatt from Hereford was not sure what Vince Cable was talking about. ‘Would it be like my lumbago? she wondered. ‘ That gives me a lot of trouble so I probably wouldn’t have noticed another one.’

Bookshop owner Millicent Crane voted with three other friends in the early evening, before going to the pub. ‘It was amazing,’ she said. ‘We all had them, even Marjorie, who we had to explain it to. We tried to go back in and vote again but of course they wouldn’t let us.’