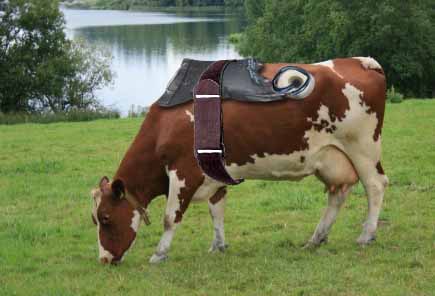 As reported exclusively by Spoofflé in 2018, start-up Cambridge company Bozone Ltd has developed a novel, low cost solution to the major problem of dairy herds contributing to global warming. The average cow produces around 350 litres of methane, a gas over twenty times more damaging to the ozone layer than carbon dioxide.

In our original article we said: ‘The product comprises a large rubber bladder strapped to the animal, with a flexible hose connected through a fistula into the cow’s rumen. The fistula includes a simple flap valve to prevent pressurized gas escaping the rumen. When a cow is brought in for milking, the methane is transferred from the bag to a central holding tank and made available for local uses such as electricity generation. The system is priced at £245 per animal and grants are believed to be available.

We spoke to Essex dairy farmer Ivor Wheatcroft and asked him about his experiences of the new product. ‘I were a bit suspicious like, you know, to begin with, he said. ‘But the girls soon got used to it and I can tell you, it’s a darn sight quieter out there in the mornings!’

Mr Wheatcroft however was unwilling to discuss the recent incident at Udderton Farm when an eighteen year old worker suffered second degree burns while bringing in the herd. ‘That young Jake’s a pratt,’ said Mr Wheatcroft. ‘How many times ‘ave I telled ‘im not to smoke when ‘e’s prodding ‘em?’