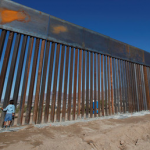 A British manufacturing company today signed a major contract with the Mexican government for the supply of 68,000 telescopic aluminium ladders.

BS Industries’ Sales Director Hector Smart said: “We’ve been in negotiations with the Mexicans since Trump started ranting about his wall in 2014. Each time he tweeted about it, the damn thing got higher, so we had to keep adding a few more rungs but hopefully we are there now.”

Spoofflé understands that the 51 foot ladders will be hooked over the top of the wall every 200 yards and that emigrants will pay 3 Pesos each to use them.

However, the biggest challenge facing the MS Industries’ design team was not enabling emigrants to reach the top of the wall but what they did next. The ‘Emigrant/Immigrant’ Transition Phase, or EITP’ as Smart calls it.

“That was a tricky one,” he added. “But then our tea lady came up with the answer, which is that once Pedro is balanced atop the wall, he pulls the ladder up, slides it back onto the USA side and climbs down.”

Pressed on why the US Border Guards would not shoot the descending Mexicans, Mr Smart shrugged his shoulders. “Hey, that’s their problem, not ours. But we do include a torch and a white flag with each ladder.”

Shipment of the ladders begins next month. The US Embassy in London has so far failed to respond to our requests for comment.