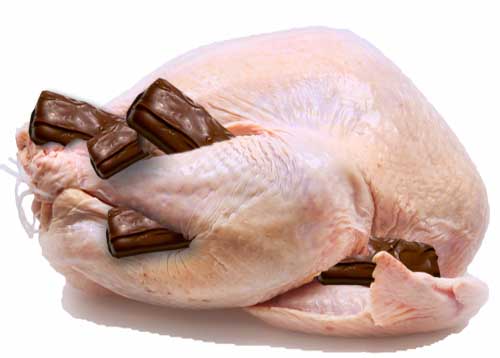 Traditional Glaswegian family butchers McCrae & Sons has been selling prime Scottish beef from its own Shorthorn herd since 1837 but this Christmas decided to diversify and offer a free range turkey stuffed with Mars bars.

The idea was the brainchild of twenty-two year old youngest son Angus, recently graduated from Aberdeen College of Cuisine. ‘Father was a wee bit sceptical at first until he tasted it,’ he said.

‘I basted the bird with a dram or two and you would’na believe the flavour that melted chocolate and caramel give to the wee birdie.’

By 9.50am last Friday, the Sauchiehall Street shop had sold out of all 298 of the 8kg stuffed birds and the queue still stretched up to Kelvin Way.

We spoke to one woman leaving the shop clutching her £52 turkey. ‘It’s m’third since Monday,’ said Aileen Gordon, lowering her voice. ‘Me’feller had two for his supper and he’s sent me back for another.’