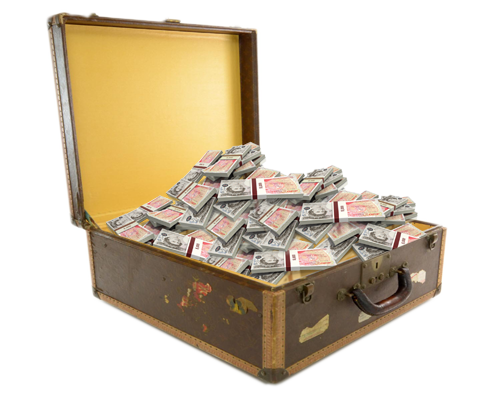 Branwen Evans, a 59 year old school cook, arrived home on Wednesday to find a suitcase on her doorstep containing over £16 million in cash.

‘I was in proper shock, I was,’ Mrs Evans told our Wales correspondent Nerys Williams. ‘There was a letter on top, handwritten like, from a Prince Umbuntu III, complaining that he’d been trying to contact me by email for the past five years to give me his uncle’s inheritance but that I never replied to him.’

Mrs Evans says she assumed the emails were a scam of some sort and had always deleted them. ‘I feel a bit bad now,’ she said. ‘But it’s very nice of him isn’t it?’

Asked what she planned to do with the money, she said: ‘Well, I’m going to get that cracked toilet bowl fixed and maybe splash out on a new saddle for my Dewi’s bike.’