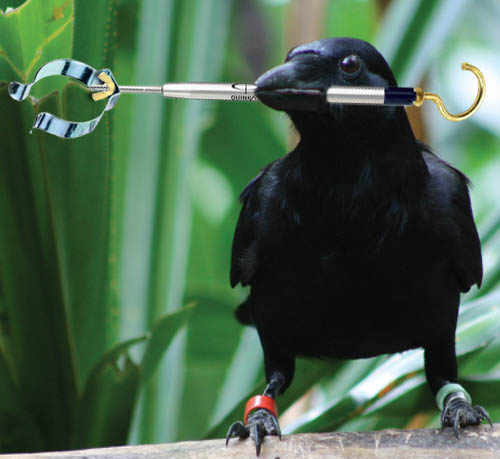 Researchers at the Leo Grinaldi Institute for Ornithology in Cambridge have for the first time observed a New Caledonian Crow building a compound tool in order to reach food rewards.

In the wild, the crow (Corvus moneduloides) has a well-documented ability to use tools such as sticks to dig out insects from crevices.

Team Leader Dr Christine Cleverly told us: ‘We were astonished by how ingenious this particular bird – ‘Leonardo’ – actually is. We left a basket full of miscellaneous bits and pieces in his cage  … nuts, bolts, paper clips, pens, superglue, soldering iron and so on … then we left a Kinder egg inside a box accessed only via a small hole, slightly larger than the egg.

Well, within half an hour he’d built a suitable tool, pushed it through the hole, gripped the egg with the spring clip and dragged it out. Amazing.’

Our Science correspondent Dr Oliver Flimwell visited the laboratory to watch the experiment being repeated. ‘Well, last week I saw the work the team at Oxford have been doing with a crow that put straws together to reach a reward but I have to say, Leonardo is something else.

Do you know, after he’d retrieved the Kinder egg and eaten it, he folded the silver paper wrapper into a tiny square then pushed it back into the egg box.’