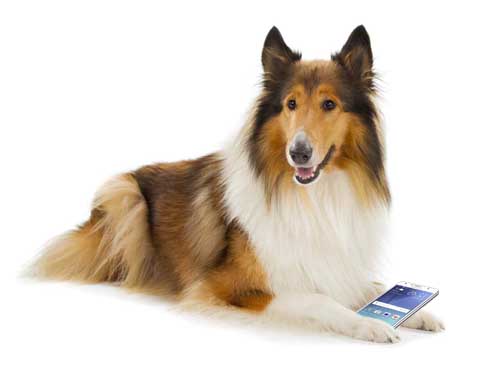 A retired school teacher owes his life to the quick thinking of his six year old pet Collie.

Grandfather of eleven Bryan Mapleyard, 81, had been out walking in the countryside with his dog Cassie on the outskirts of Dudley when he slipped and fell into a disused mine shaft. As he lay unconscious, it appears that the dog managed to retrieve the man’s phone from his pocket and call for help.

West Midlands emergency services operator Ashley Barton took the call. ‘I asked the caller what service they wanted but after a bit of a pause, there was just a bark so I thought perhaps it might be a dog.’ Ashley told us that he realised he had to take the lead in the conversation.

‘I had a sort of feeling about it, call it intuition if you like, so I asked it ‘What’s the matter boy? Is Grandpa trapped in the old mine shaft just off the Oakham Road?’ and the dog barked what I took to be a ‘Yes’. That’s all we needed really, so we had the cavalry down there quick as you like.’

After a three hour operation, Mr Mapleyard was finally brought up from the mine shaft, having suffered concussion and three fractured ribs. Speaking from his home in nearby Oldbury, he had nothing but praise for Cassie.

‘She’s a grand lass, is Cassie,’ he said. ‘Heaven only knows how she let them know where I was, it’s unbelievable, it really is, sort of thing that only happens on tele.’