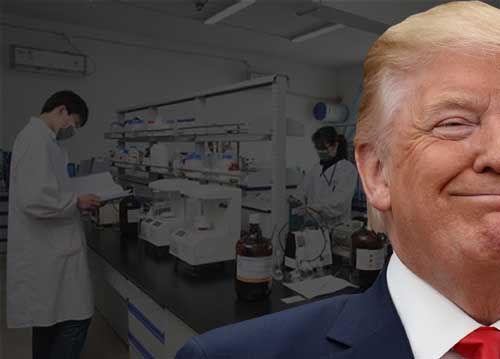 In a torrent of tweets last night, President Trump claimed to fully understand the complex process of genetically modifying an organism and questioned why the technique was not being applied in every aspect of our lives.

3.03am ‘SCANDAL that our so-called SCIENTISTS still haven’t commercialized GM! I’ve read all the stuff about it and it’s NOT rocket science. WAKE UP white coats. SAD.’

3.08am ‘VERY disappointed in National Human Genome Research Institute. $680 BILLION taxpayers’ cash and still no GM kits for sale on Amazon! WHY?’

3.16am ‘FRUSTRATED at lack of imagination from scientists! GM tech is dynamite so WHY have we STILL got diseases? WHY no TURKEYS with ten legs? Just finished a whole Wikipedia page on this stuff, SIMPLE, so simple. TRAGEDY!’

3.23am ‘Just ORDERED Genome Institute to have designer-baby kits out by Christmas. THIS Christmas! Gonna be cool folks. So cool. What did I tell ya? Gonna make America GREAT again! Look out CHINA!’

‘Oh yes I remember, oh my dear god,’ he said. ‘I guess he was ten or eleven then but he would argue with me every damn day. Arrogant? You gotta be kidding me! He was the only kid I ever met in forty eight years of teaching who wouldn’t accept that the moon orbits the goddam Earth. What did he call it? Oh yeah, he said it was ‘fake’ information, a lie put out by ‘pretend scientists’. He was unteachable, an idiot, so I refused to have him in my class.’

We asked Mr Bachmeier how the boy had coped with other subjects. ‘You really wanna know?’ he said. ‘Well, I think the problem was he already knew everything there is to know. Period. I mean, you ever hear of a kid who couldn’t understand why we don’t breathe nitrogen because ‘there’s a lot more of that stuff around’? And now he’s the leader of the free world? God help us.’

** Read the incredible letter that Donald Trump’s Head Teacher sent to his parents in 1956 here.