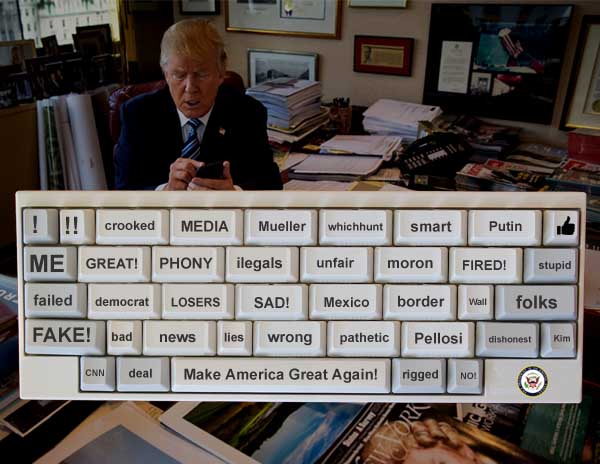 It’s a question that has baffled Trump-watchers for years: how does a man with the grammar skills and finger span of a six year-old manage to pump out tweets at such a prodigious rate?

Spoofflé’s US political correspondent Dale B. Winklehausen has found the answer: he uses a special Bluetooth keyboard, linked to his iPad.

“Trump just doesn’t get on with a conventional QWERTY keyboard,” said Dale. “All those silly little letters he has to find and press to make grown-up words just makes him mad. So Melania brought in a team of psychologists who, after analysing 178,000 of his tweets, found that he actually used the same 46 words in over 95% of his messages.”

The result is a novel, word-based keyboard with which Trump boasts that he can broadcast up to 24 tweets per minute. Illinois manufacturer, TJI Inc., tells us they now have plans to market the accessory next Spring as the ‘Dumbo 45’.