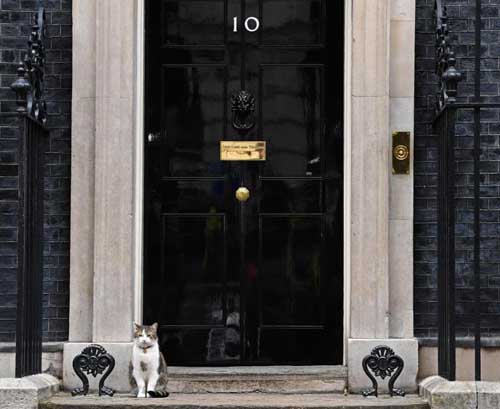 As if the impending vote on the PM’s Brexit deal wasn’t enough to contend with, officials have confirmed that Larry the cat has left No 10 after contract talks collapsed around midnight last night.

A major obstacle to negotiations has been the freedom of movement of other cats around the Downing Street building, a situation which Larry says has depleted mouse stocks almost to the point of extinction. In return for allowing other cats unfettered access to all No 10 rooms, Larry was offered a private ‘back flap’ to No 11, which he has rejected as ‘an insult.’ Worse still, it appears that the ‘back flap’ would stay in place for as long as Downing Street wished it and that Larry would have no unilateral choice over its removal.

In June 2016 Larry gave notice that he would no longer accept boring, standard issue Civil Service cat food, preferring instead to buy his own directly from other sources, especially ‘Dreamies Extra Plus’ treats from Peru, banned across all Government departments as containing the addictive compound Abrexitin.

Staying temporarily at a friend’s shed nearby, Larry told Spoofflé that the deal he was being offered was totally unacceptable. ‘They think I’m an idiot, just because I wanted to leave,’ he slurred, eyes glazed after finishing a third bag of Dreamies. ‘But it’s too late guys, I’m off.’