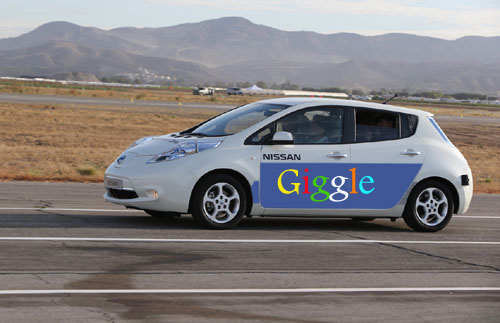 In a major setback for the AI industry, a driver-less car has been found guilty in a US court of ‘reckless endangerment’ after it was recorded travelling at speeds of up to 93 mph through a busy town centre.

Although the Nissan Leaf was carrying a human passenger as an observer, she says it ignored all attempts to make it slow down. Marigold Kolperiato, an employee of Giggle Inc, the car’s developer, told the District court in Dead Man’s Gulch, Arizona, that she thought she was going to die.

‘It just kept on a’going, like it was real evil, ‘she said. Apparently the car has no passenger controls and is reliant on voice-activated communication with the AI system. ‘I yelled “slow down there baby!” but it didn’t make no difference, it just went even quicker.’

Witnesses report the car tailgating, honking its horn and flashing its headlights at them. At least twice it appeared to deliberately swerve into standing puddles to soak shoppers standing on the sidewalk.

In addition to the ban, the car must attend a thirteen week speed awareness course and have its AI software upgraded to version 34.