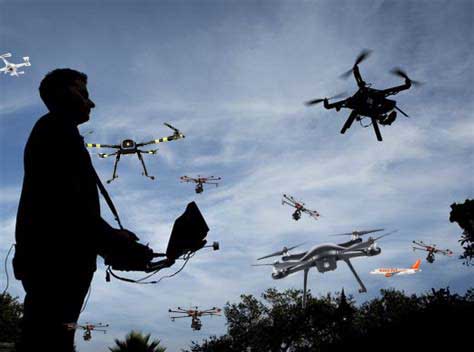 The prestigious three-day meeting had attracted over 270 drone pilots from across Europe and the Far East, each of whom had paid £310 to participate.

Valeri Kalashvinopic, 37, a heating engineer from Ukraine, told Spoofflé’s reporter that his trip had been completely ruined. ‘Why is happen?’ he demanded. ‘For why? One stupid airplanes is spoiling happiness for so many peoples?’

Club president Graham Satchell was incandescent. ‘This is simply outrageous,’ he said, waving a copy of his CAA event authorisation certificate FLC-340230Y. ‘Everybody knew we were flying today … Air Traffic Control, the RAF, the local Police, Age Concern. We even told the RSPCA in case the buzzing upset nearby dogs.’

‘If it had been Ryanair,’ he said, ‘I might have understood, but not EasyJet for god’s sake. It was just totally reckless behaviour by a daft pilot who should have known better. I dread to think what might have happened if he’d been half a mile closer. If he’d made contact we could have lost several drones and believe me, they’re not cheap.’