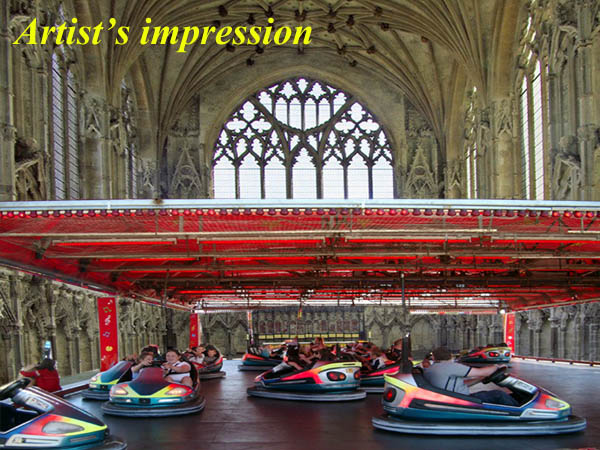 Following a call by the Archbishop of Canterbury this week to make places of worship more fun, Ely Cathedral has ordered a 28 car dodgem ride to be installed next Spring in the North Transept. ‘If you can’t have fun in a cathedral,’ Justin Welby said in his video broadcast, ‘do you really know what fun is?’

The Very Revd Mark Bonney, Dean of Ely Cathedral, told our religious affairs correspondent Fay Goodenough that the ex-Blackpool ride was just the first in a series of exciting activities his team were planning. ‘We think it will attract a lot of people who would never, ever consider going to church, he said. ‘In fact, the idea is that they won’t actually know they’re in a church until it’s too late.’ Fay also noted that the entire cathedral exterior has recently been painted pink and black and posters outside promised ’24 hour dodgem racing’ and the opportunity to ‘Share your hedonism with God’.

The Reverend Bonney revealed that future fun will include fire-eating courses for the over Sixties, belly dancing workshops and a 53 metre high helter-skelter ride in the South Transept. ‘We’re very excited about that particular ride,’ he said. ‘We believe it will be the tallest and fastest indoor spiral ride in Europe and it’s certainly the only one without any protective side railings. There will be a 50p charge, which will go into our roof fund, and visitors will carry their own cassocks to the top. Even if they have never prayed before in their lives, we expect them to have started during the nine second journey down.’