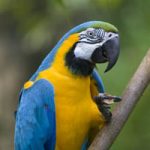 A parrot called Jessie was still on the run this morning, after telling firefighters who gallantly tried to rescue her from a roof to “f*** off.”

Spoofflé has learned that the multi-lingual macaw who lives in Edmonton, North London, is no stranger to controversy. Local magistrates have slapped ASBOs on the foul-mouthed pet seven times in the past five years, most recently following an incident during an Aegean Airlines  flight from Athens to the UK when Jessie’s Greek owner was returning from a business trip. We understand that the bird is permitted to travel as his ’emotional support companion’.

On the final approach to Luton airport, passengers were alarmed to hear a woman’s voice screaming “Brace! Brace!” Kelly O’Riordan from Sutton, a 24 year old Ann Summers product tester, told Spoofflé what happened. “Oh my god it was so scary,” she said, “God’s truth, my  heart literally stopped for ten minutes!”

But when she and her fellow hen party colleagues heard the same voice squealing “Get up! Get up!” and removed their heads from between their knees they saw the macaw swaying back and forth on its owner’s headrest and, according to Ms O’Riordan, laughing at them. Security officers later boarded the plane and arrested the bird for ‘behaviour likely to endanger an aircraft.’