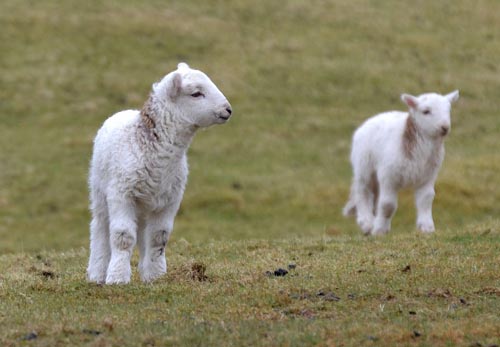 Eleven years in the Paratroop Regiment had not prepared 31 year old Steve Hardy for his near-fatal encounter last Sunday with a flock of crazed lambs near Combe Martin in Devon.

Steve was walking the South West Coast Path alone when he foolishly entered a field full of new born lambs with their mothers. ‘I thought nothing of it to begin with, they were just bleating and stuff,’ he told us. ‘But half way across, they started following me and making a sort of nasty grunting sound.’

He admits to shouting at the lambs, a mistake which experts say only further infuriates the creatures. We suggested that the sheep were simply defending their young but Steve didn’t agree. ‘Oh no,’ he said. ‘It was the lambs who ganged up on me, the sheep stayed back under a tree and watched.’

The six foot six engineer then decided to make a run for the fence bordering the 800 foot Great Hangman cliffs, leaping over it as the lambs launched their attack. ‘There must have been fifty or sixty of the little bleeders,’ he said. ‘Licking and pushing and jumping up in a frenzy. I’m very lucky to have got out with just slimy trousers. It doesn’t bear thinking about what could have happened if I’d not got over that fence. They were killers alright, my training told me that.’

Steve then slid part way down the near-vertical cliffs before managing to cling to a small bush. As dusk approached, a sharp-eared lobster fisherman heard his cries for help and alerted the Coastguard. Shortly after 9.30pm he was winched up and taken to hospital from where he was later released.

‘I’m not walking there again, ever,’ he later told us. ‘The worst thing was the evil look in their little eyes. I’ll never forget that. You think ‘oh yeah, they’re just sweet lambs’ but you weren’t there.’