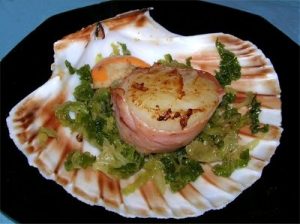 About 20 French boats ambushed the smaller British fleet 20km off the Normandy coast. On previous nights, reported skipper Baz Trenton, the missiles thrown by the French crews had been relatively harmless.

“They was just iron shackles, anchor chains, bolts – that sort of stuff. So we just chucked ’em back.” However, nothing prepared Trenton and the crew of ‘Happy Buttock II’ for the onslaught that was to come.

“The frogs come round us in a circle, so bloody close you could smell the garlic. I never seen nuffing like it, or smelt it – first it was Escargots de Bourgogne that come over, buckets of ’em what soaked the lads in melted butter, then the Coquilles Saint-Jacques started and they’re bloody lethal, whizzing over like razor-edged Frisbees. Tasted quite good though.”

But it was the blizzard of deadly croque monsieurs which overwhelmed the little boat. “They just kept coming,” said Trenton, “It was ‘orrible, there was slices of ham stuck down the funnel and stinky cheeses running down the windows. I never seen one-eyed Jack cry before but he did last night. Don’t blame ‘im though, very nasty those toast burns he’s got on his face and arms.” The Happy Buttock II attempted to return fire with three pork pies and packet of Twizzlers but quickly realised they were outgunned and fled the fishing grounds.

Captain Trenton suspects that the French fishermen intended to do harm. “We caught a croque monsieur with a net before it hit the deck and exploded and you could see they’d toasted the bloody bread till it was black then sharpened up the edges, probably with one of them Sabbatical knives. Lethal they was, lethal. So where’s the bloody Navy when you need them, eh?”