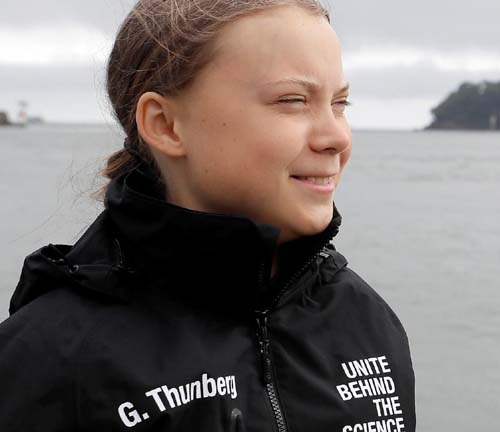 Spoofflé has learned that environment activist Greta Thunberg plans to walk home over the sea after speaking at the COP25 climate conference in Santiago, Chile in December.

The 16 year old student, who gained global praise earlier this year for embarrassing politicians into pretending to reduce their carbon footprints, arrived in New York this week after crossing the Atlantic in a zero carbon racing yacht.

Faced with the moral and practical dilemma of how to return to Sweden without using fossil fuels, Greta stumbled upon the answer while trying to recover a blue toilet bucket she dropped from the boat during the voyage.

“I was being in the water after the falling overboard,” she told us. “But I was not being sinking at all, in fact, I was not even being wet!” Amazingly, the Nobel peace prize nominee was able to jog back to the yacht across the waves and climb back on board without assistance.

Now she plans to walk the 14,300km back from Chile, up across the Pacific oceans, through the Bering Straits between Russia and Canada and into the bleak Arctic ocean before dropping down into the Barents Sea and finally home to the Swedish coast. Greta will carry a miniature solar desalination plant plus ample supplies of high protein, Chilean gujavea beans in a zero carbon backpack woven from coconut matting.

She believes the journey should take her no more than six weeks and has the full backing of her father, Svante. “When Greta is wanting to be doing the something big, she just does it,” he said.