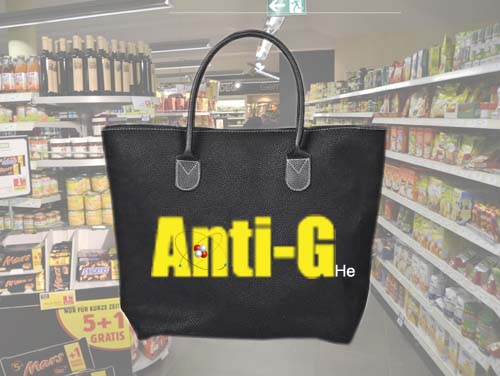 Weary shoppers will soon be able to benefit from a ‘lighter than air’ bag, according to Macclesfield supplier, BCB Gases Ltd.

The ‘Anti-G’ bag is made from ‘Snaphene’, a one molecule thick miracle material, and has a total weight of barely 5 grams.

The interior of the bag is lined with sealed Snaphene ‘pouches’, filled with fifty litres of pressurised Helium gas.

Spoofflé’s Science correspondent Dr Oliver Flimwell received a pre-production version of the bag for testing earlier this year. ‘It’s a bloody clever idea,’ he said. ‘As every schoolboy and schoolgirl knows, a litre of Helium produces about a gram of lift so the bag should be able to raise at least 45 grams of shopping.’

Dr Flimwell was less impressed with the manufacturer’s advertisements for the Anti-G bag, as aired on TV this week. ‘Bring home the whole week’s shopping floating behind you!’ is the proud claim. ‘It’s amazing!’ laughs a young man in the advert. ‘I’ll never have to carry heavy shopping again!’

‘Not sure about that,’ said Dr Flimwell . ‘I would have thought strong enough to float home a bunch of fresh dill or a sachet of saffron, but not both in the same trip.’

The launch has not been without its problems. Mavis Duckworth from Leicester was thrilled when her son bought her an Anti-G bag for Mother’s Day. ‘It was so good of him,’ she told us. ‘But such a shame. I unwrapped it in the garden and it just floated straight off into the sky. We never saw it again.’

Following dozens of similar complaints, the manufacturer now includes a complimentary can of HP beans inside each bag.