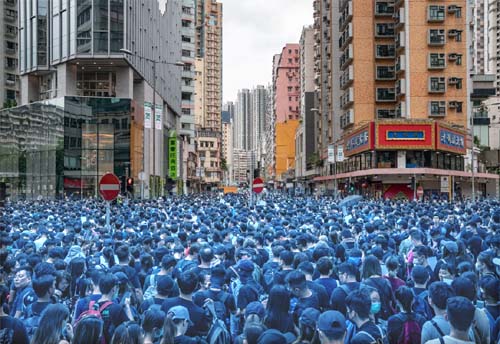 Riot police in Hong Kong have abandoned their  tactic of spraying protesters with blue dye after an estimated two million residents gathered in the city centre on Sunday, already covered in the same blue dye.

The controversial spraying had enabled the authorities to later track down and identify the ring-leaders.

Senior activist Xian Meng explained their strategy to Spoofflé: “It so simple,” she said. “I tell all people ‘go on Amazon and buy All-Weather Bovine 64 oz Spray can’. What authorities do, eh? We all blue now!”

The spray manufacturer Agridip warned last night that the dye typically lasted between 8 and 10 years, could not be washed off and had been known to cause severe diarrhoea.