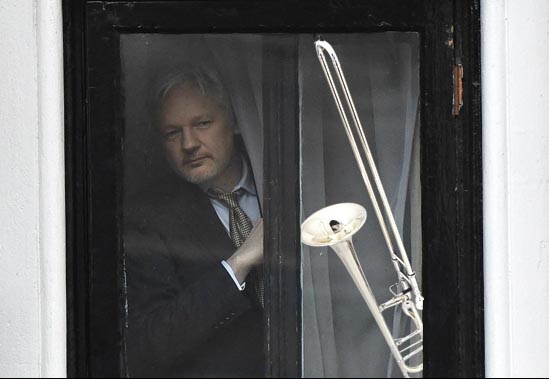 A court in Quito, Ecuador, yesterday added a further restriction on the activities of its most infamous citizen, Julian Assange, who has lived at their London embassy since 2012.

Mr Assange, 47, the Wikileaks founder, must hand over to embassy staff the trombone he has been trying to play by next Friday, or face expulsion.

Staff have long complained about Mr Assange skateboarding and playing football in the corridors but his attempts to learn the trombone in the tiny first floor Knightsbridge mansion have become ‘unbearable’.

Counsel for the embassy Eduardo Sanchez told Spoofflé by Skype call: ‘When he is trying at first the flute in 2017, it is being no problem. But since he is having the trombono, the staff they have not sleep.’

Spoofflé spoke to nearby residents of Hans Crescent. Portrait artist Priscilla Cadwallader at No. 7 has complained many times to the local environment officer. ‘Oh it’s terrible, just terrible,’ she said. ‘The noise usually starts around 2am and goes on and on and on until dawn. At first it sounded a bit  like ‘Teddy Bears’ picnic’ but my son says he thinks it’s ‘I want to break free.’ I wish they’d set him free, I really do.’

However, this latest ultimatum may yet be dodged by the wily resident. As we went to press this morning, an unnamed source within Amazon UK texted us with details of Mr Assange’s latest on-line order, which includes a classic Fender Stratocaster, a 600 watt Marshal amplifier and a set of bagpipes.