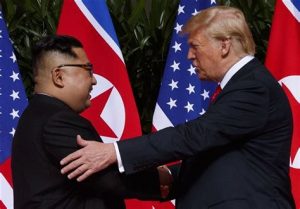 A source close to Kim Jong-un has revealed that the North Korean leader challenged the US president to an arm wrestling contest during their private June meeting in Singapore.

Spoofflé spoke by Skype this morning to the woman, who wished to be addressed simply as Soon-Bok. She claims to be a close relative of Mr Kim’s interpreter, one of only four people present in the room at the time. The meeting did not go well she says. “Mr Trump bang table and spill glass of People’s water. He say Supreme Leader stop building nuclear weapon right now, like today, so Supreme Leader he say ‘You beat me at arm wrestle then I no more make missiles.’

By cross-checking his Twitter feed at that time, it seems Mr Trump thought this a great joke and paused the meeting to tweet ‘Great meeting with little rocket man folks. Gonna show him how a strong leader does business!’

Contrary to appearances, the source said Mr Kim works out for three hours each morning, lifting a peasant on each arm. “Mr Trump not easy man to wrestle,” said Soon-Bok. “Our Dear Leader he have put the Trump hand inside his own fist to do wrestle. There lot grunting and not nice words from Mr Trump when Supreme Leader push the Trump arm down on the People’s table.”