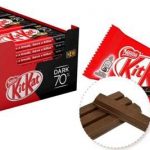 Security has been stepped up at Brixton Prison this week after a routine dog patrol discovered a large stash of 70% ‘Dark KitKat’ bars concealed in the weekly Amazon delivery of drugs.

A source close to the Governor told Spoofflé: “These guys knew what they was doing alright, they’d hid the stuff under 20Kg of weed, two drones and a crate of syringes.” We understand that Brixton’s only detection dog Bozo, a fourteen year old Dachshund, is due for retirement this year. Dark KitKat can change hands for up to £50 a bar, with the 70% brands commanding even higher prices.

“When she got a whiff of the stuff she just went bananas, jumping up and down and done a little wee-wee. It’s what they’re trained for, years it takes.” Asked why the dog had failed to detect the other contraband, the source explained: “Well, our deliveries all come in on a high up table what Bozo can’t reach ‘cos of her little legs. But yesterday someone must ‘ave just dumped the box on the floor so she ‘ad a chance to sniff it.”

Vistors leaving the prison this morning said their loved ones were extremely upset. Joylene Smacke, 36, struggled to control her eleven children as she told us: “What they meant to do in there, eh? We all needs choc don’t we? My Jason ain’t had no 70% stuff for weeks now and it’s bleeding unfair!”

A spokesperson for the Howard League for Penal Reform claimed the discovery simply confirmed the unacceptable conditions in British prisons. “These are just normal people, just like you and me, with normal needs. Yes, they might have murdered someone a bit but they still need little luxuries like a Dark KitKat.”