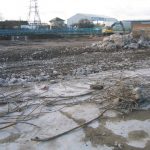 Haringey is the latest Labour-controlled council to refuse planning permission for a major new concrete office block in the city.

Apple Inc. had submitted plans for an 872 foot diameter London HQ in the shape of an apple, referred to within technical circles as ‘The Apple.’

Their decision was backed by Jeremy Corbyn, who called for a more environmentally friendly approach to new builds. Writing in The Guardian, he said: “The Labour Party is not, and never has been, anti-cementic,” pointing out that approval had recently been granted for a concrete public toilet in Highgate. “We will not tolerate anti-cementism of any kind in the party. We are a bricks and mortar party and our public standards committee will take immediate disciplinary action against all anti-cementites.”

Mr Corbyn will be the keynote speaker at next week’s ‘Wood is Good’ conference being organised in Barking by the Palestinian Front against Non-Organic Construction.