In a dramatic change of strategy, Lego this week launched its first affordable home for first-time buyers.

Priced at only £9,975, the 256 piece kit of giant, lightweight plastic bricks comes with full assembly instructions and, the supplier claims, can be built in less than a day by a reasonably intelligent person.

Lego’s UK Sales Director Sarah Mellor explained to Spoofflé who the kit was aimed at: ‘Typically young couples, maybe still living with their parents but who are fed up paying rent. It has just the one master bedroom but the great thing is that it’s classed as a ‘play house’ so you don’t need planning permission. When you’re ready to move, you just knock it down and rebuild it somewhere else.’ 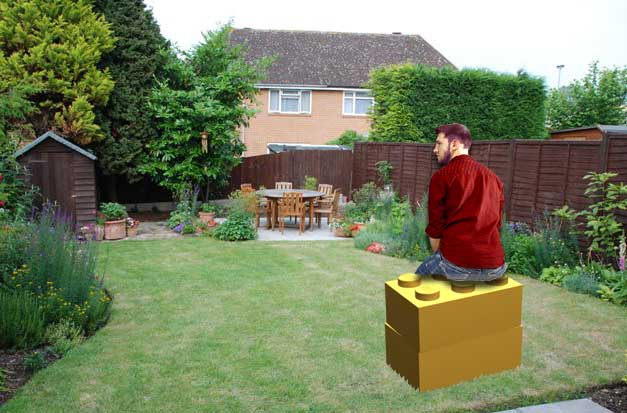 Jason (pictured on left) and Hattie Fallon built their own Lego house last Monday on the lawn of Hattie’s parents’ house in a leafy Surrey backwater. ‘Mum and Dad were  brilliant about it,’ said Hattie. ‘Although it was rather a shock for them when they got back from shopping in Eastbourne.’

‘It’s a bit of a squeeze,’ she added. ‘But it’s so cozy once you’re inside and it’s really ours. And you get used to the smell after a while.’