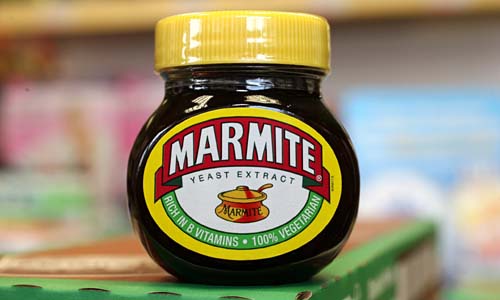 Residents of the sleepy Yorkshire village of Wetwang (population 782) appear to have found the secret to an extended and healthy life.

In the week when a report showed life expectancy in the UK had stopped improving, the hardy folk of Wetwang were quick to pinpoint their daily intake of Marmite as the reason they have bucked the national trend.

Madge Ramsbotham, 109, told Spoofflé that everyone in the village swore by the salty spread. ‘Oh aye, it’s champion,’ she said. ‘A large jar every day, rain or shine, after my run. Always have. Always will, even when I get old.’

Our Health Correspondent Dr Cressida Thompson-Bone visited Wetwang and made some startling discoveries. ‘It’s incredible, ‘she said. ‘Everyone I spoke to has Marmite for every meal, in some form or other. They bottle-feed their babies Marmite shakes, school meals are either Marmite pies or Marmite pasta and the local cafe even has a Marmite Jalfrezi on the menu.’

On average, Wetwang men can expect to live to 109 and women to 112, decades longer than the typical Briton. But not all residents have been so keen on the pungent black spread. Mrs Ramsbotham’s neighbour Ken Blenkinsop apparently refused to even sniff the stuff.

‘I told ‘im,’ she said. ‘You tek your spread Ken lad or there’ll be trouble. Never listened. Conked out at 97 which just shows you doesn’t it? Silly boy.’