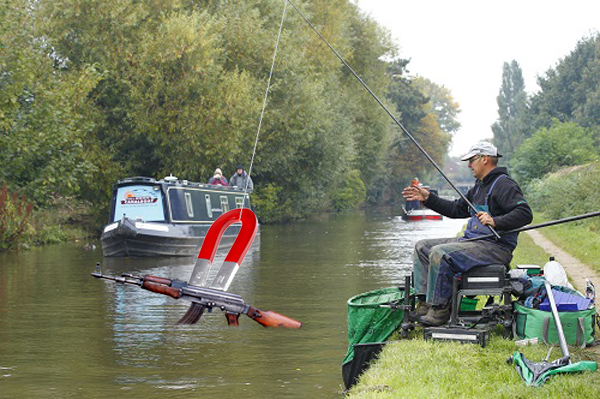 A new law spells the end to uncontrolled magnet fishing in Britain’s canals and rivers. The sport has grown rapidly in recent years, with experienced anglers (known as ‘maglers’) landing catches including swords, shotguns, safes and even parking meters.

However research by British Waterways has revealed an alarming drop in the stock of ferrous materials due to over-fishing, which they say could lead to severe shortages.

Waterways spokesman Malcolm Spindler explained the need for the law:

“It’s just got totally out of hand,” he said, “you’ve got mum, dad and ten kids hauling out whatever they like and leaving very little for professional maglers. It’s just not right so that’s we’re taking tough action now.”

In addition to the restriction on knives with a blade less than 12cm long, maglers will also have to throw back items from an extensive list including pistols with a calibre less than .45, shopping baskets, children’s scooters and office hole punches.

Mr Spindler painted the grim situation facing our waterways, unless stocks are preserved for future generations. “Just imagine,” he said, “by 2030 we could see Regent’s Canal totally cleared of all ferrous items, denying our children a decent day’s fishing and we just can’t let that happen.”