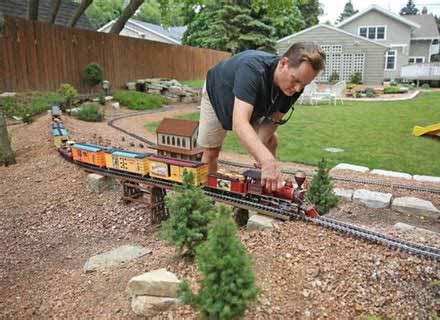 A Portsmouth family is facing financial ruin after 43 year old accountant Paul Hammond put his obsession with expanding his modest 1/76th scale model railway at all costs above their daily needs.

Mrs Gloria Hammond spoke to Spoofflé this morning. ‘Well, to begin with the train just went in a little loop round the lawn,’ she said. ‘But then he told me he needed it to go faster so the KitKats and coffees I send round to his shed on the back of the train would get there ten seconds quicker.’

‘He said it would only cost £260 to buy a new engine, lay new tracks and move the flower beds but that was ten years ago and so far he’s spent £287,000 and it’s not even bloody well started.’

Mrs Hammond says she has tried to economise by cutting back on clothes and presents and cancelling their holidays, even having to use food banks to feed their four children. Unpaid debts are piling up and the family now face having to sell the house and move in with relatives.

‘I’ve had enough,’ she said. ‘This morning he told me the bends in the track are too tight for the speed he needs and this stupid train will now only be two seconds quicker than the old one.’