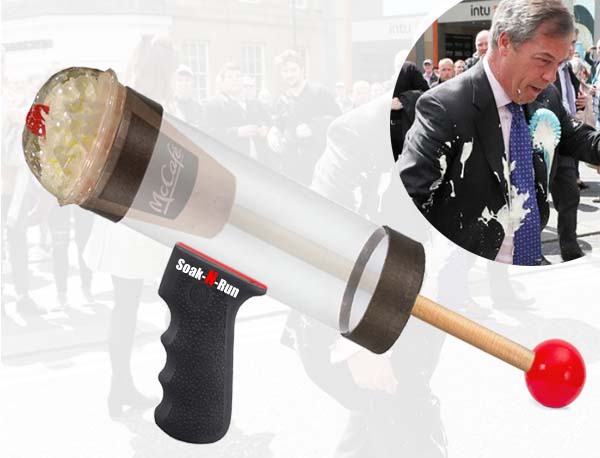 Protesters who attack politicians with milkshakes face two dangers: a good chance of being arrested and, even worse, an expensive dry-cleaning bill for their own designer clothes ruined by the inevitable splashback.

But a Chelmsford company has come up with a practical solution: the ‘Soak-N-Run’ from Big Boys Toys is a safe, lightweight milkshake launcher with a claimed range of 30 feet. The weapon accepts all standard McDonald’s and Burger King large milkshakes, in strawberry, banana and chocolate flavours and is operated by a large knob.

Marketing Manager Frankie Dassen told us: “It’s a real problem isn’t it?” he said. “You know, you want to make a serious yet harmless statement but obviously you don’t want to get caught. For less than a tenner, you can drench your enemy in creamy goo from the safety of the crowd, then run like hell.”