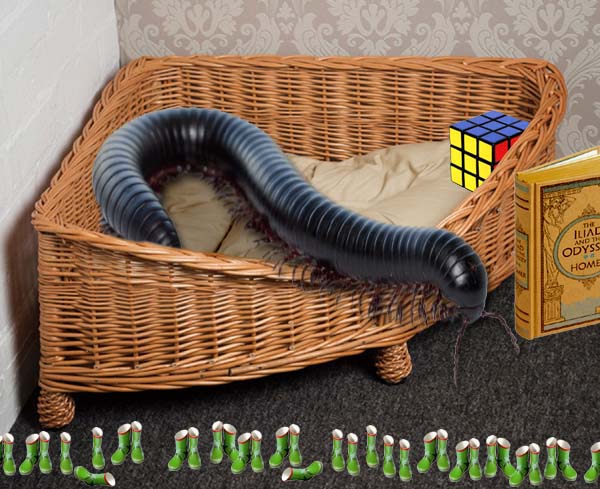 A Blackburn man claims that his giant pet millipede can solve complex puzzles and has learned to read.

Gareth Walmsley, a 56 year-old bachelor, found the creature five years ago in a bunch of bananas from Asda.

“Alice were just a bairn back then,” he told Spoofflé, “about length of little finger, she were.” But the millipede – an Archispirostreptus gigas from Kenya – continued to grow at an alarming rate, eventually reaching 1.6 metres.

“It were my fault really,” added 23 stone Gareth. “I started sharing me tea with her, triple burger and chips, black pudding and tripe, stuff like that and she loved it.”

Gareth, who still lives with his mother, soon discovered that Alice was more bookworm than millipede, often sneaking comics from under his bed to read in her basket. “Her favourite book is called Homer’s Iliad,” he said. “I got it from Mrs Arbuthnot’s charity shop for 10p, because I like ‘Simpson’s’ on’t telly but I’ve not read it yet.”

He also told us he received a Rubik’s cube for Christmas last year but when he couldn’t find where the batteries went, he gave it to Alice who promptly rolled on her back and solved it in 55 seconds.

The pair are sometimes spotted walking together in local Eckerslike Park. “Oh she loves a walk, does my Alice, little legs going nineteen to dozen. Everyone stops to pat her.”

The walks however are a major undertaking as it can take him over two hours to put her wellies on and another two and half to take them off and clean them. “Me Mam says ‘you’re not bringing that thing in my house with muddy feet’ so I bought 298 pairs of doll’s boots from that Amazonian place on’t interweb.’

Gareth and Alice are to feature in next month’s Channel 4 documentary ‘Would you believe it?’

Troubled by millipedes taking over your home? Spoofflé recommends this brilliant article on practical measures here.