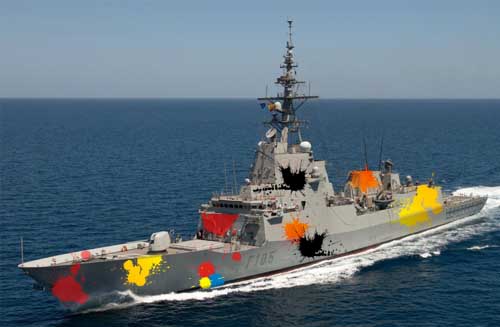 An MoD enquiry has been opened this evening after Defence Secretary Gavin Williamson proposed that the Royal Navy should deter Spanish warships entering the waters around Gibraltar with paintballs.

Unfortunately, his statement was mistakenly interpreted as an order and HMS Duncan, a Type 45 destroyer, engaged the Spanish frigate Caballo de mar in the Bay of Gibraltar on Sunday morning. A total of 73 rounds of 120mm Dulux Super Marine shells were fired, of which 51 found their target. The Spanish vessel later retired from the area.

Prime Minister Pedro Sánchez has recalled his ambassador to Madrid and demanded that the UK urgently send 42,000 litres of paint remover.