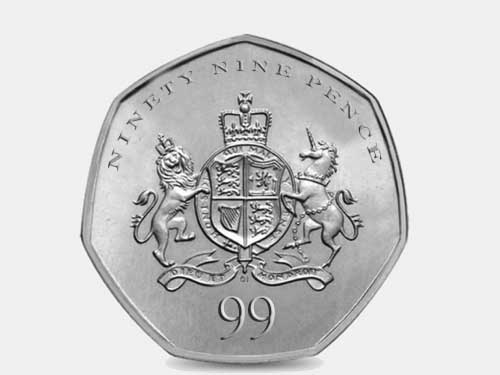 Critics of the pointless 1p coin have welcomed today’s announcement by the Bank of England of a new 99p coin.

Governor Mark Carney told Spoofflé: “Nobody ever carries the stupid little thing yet everywhere you go, products are priced at £13.99 or £29.99 so we all end up with a useless jar of shrapnel on the mantelpiece.”

We asked high street shoppers in Basildon, Essex, what they thought of the new 99p coin.

Mirleen Spratt, 23, said: “Oh that’s brill isn’t it? When they like said the 1p was going to be dropped, I was like so worried that shops would like so put their prices right up, like from £9.99 to £10 and I’m like a mum with six kids so like there’s no way I could afford that. I mean like, £10 is a lot more isn’t it?”