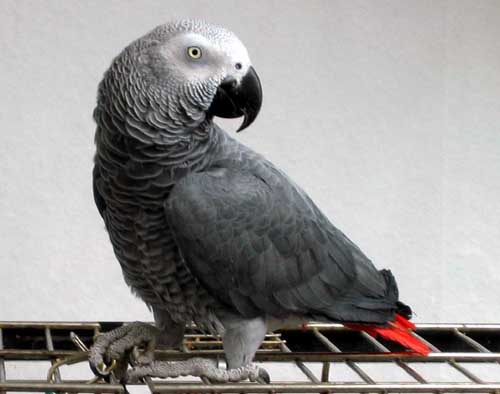 An African Grey parrot named Graham has amazed behavioural psychologists by reciting the value of Pi to over 500 decimal places.

The three year old bird belongs to Alan Findlay, a milkman from Hull, who called Spoofflé on Monday afternoon. ‘God knows where ‘e gets all them numbers from,’ he told us. ‘To begin with I thought ‘e were just rambling like, just saying stuff what e’d heard on’t tele. But then our grandson Leonard heard ‘im and Leonard who’s eleven and like does the arithmetic ‘e said it were definitely some Pi, whatever that were.’

Zoologists from the University of Hull have borrowed the bird and are conducting tests under rigorous laboratory conditions. One theory is that he may actually be calculating the value of Pi, rather than simply reciting it.

Dr Louise Wellman told us: ‘He’s certainly a very clever parrot, even for an African Grey. When he arrived last week he complained about the height of his swing and asked for some sherry. After he’d finished it, he recited Pi three times up to 535 places, followed by Coleridge’s ‘Rime of the Ancient Mariner’, the whole tedious thing, which we all had to listen to.’